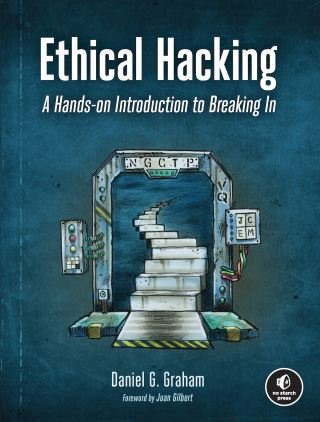 A Hands-on Introduction to Breaking In

A hands-on guide to hacking computer systems from the ground up, from capturing traffic to crafting sneaky, successful trojans.

A crash course in modern hacking techniques, Ethical Hacking is already being used to prepare the next generation of offensive security experts. In its many hands-on labs, you’ll explore crucial skills for any aspiring penetration tester, security researcher, or malware analyst.

You’ll begin with the basics: capturing a victim’s network traffic with an ARP spoofing attack and then viewing it in Wireshark. From there, you’ll deploy reverse shells that let you remotely run commands on a victim’s computer, encrypt files by writing your own ransomware in Python, and fake emails like the ones used in phishing attacks. In advanced chapters, you’ll learn how to fuzz for new vulnerabilities, craft trojans and rootkits, exploit websites with SQL injection, and escalate your privileges to extract credentials, which you’ll use to traverse a private network.

You’ll work with a wide range of professional penetration testing tools—and learn to write your own tools in Python—as you practice tasks like:

Along the way, you’ll gain a foundation in the relevant computing technologies. Discover how advanced fuzzers work behind the scenes, learn how internet traffic gets encrypted, explore the inner mechanisms of nation-state malware like Drovorub, and much more.

Developed with feedback from cybersecurity students, Ethical Hacking addresses contemporary issues in the field not often covered in other books and will prepare you for a career in penetration testing. Most importantly, you’ll be able to think like an ethical hacker⁠: someone who can carefully analyze systems and creatively gain access to them.

Daniel G. Graham: Dr. Daniel Graham is an Assistant professor of Computer Science at The University of Virginia in Charlottesville, Virginia. His research interests include secure embedded systems and networks. Before joining UVA, Dr. Graham was a Program Manager at Microsoft in Seattle, Washington. He publishes in IEEE journals relating to sensors and networks.