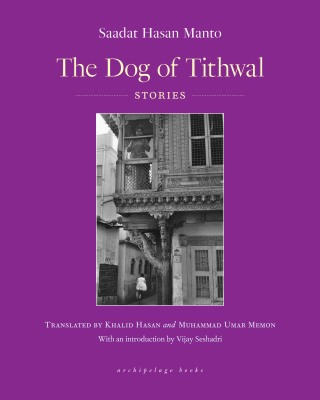 The Dog of Tithwal

Stories encircling the marginalized, forgotten lives of Bombay, set against the backdrop of the India-Pakistan Partition.

By far the most comprehensive collection of stories by this 20th Century master available in English.

A master of the short story, Saadat Hasan Manto opens a window onto Bombay’s demimonde—its prostitutes, rickshaw drivers, artists, and strays as well probing the pain and bewilderment of the Hindus, Muslims, and Sikhs ripped apart by the India-Pakistan Partition.

Manto is best known for his dry-eyed examination of the violence, horrors, and reverberations from the Partition. From a stray dog caught in the crossfire at the fresh border of India and Pakistan, to friendly neighbors turned enemy soldiers pausing for tea together in a momentary cease fire—Manto shines incandescent light into hidden corners with an unflinching gaze, and a fierce humanism.

With a foreword by Pulitzer Prize–winning poet Vijay Seshadri, these stories are essential reading for our current moment where divisiveness is erupting into violence in so many parts of the world.

Saadat Hasan Manto: Saadat Hasan Manto wrote more than twenty collections of short stories, five radio dramas, three essay collections, one novel, and a handful of film scripts. A Muslim living in Bombay at the time of the India-Pakistan Partition, Manto was forced to migrate with his family to Lahore, where he wrote his most wrenching Partition stories. When asked why he sought to humanize the grit of Bombay and the upheaval of Partition, Manto retorted, “If you cannot bear my stories, it is because we live in unbearable times.”

Born in Kashmir, journalist, author, and translator Khalid Hasan is best remembered for his translations of the poetry of Faiz Ahmad Faiz and Saadat Hasan Manto's short fiction.

Muhammad Umar Memon was a critic, short story writer, and translator. He edited The Annual of Urdu Studies at the University of Wisconsin.