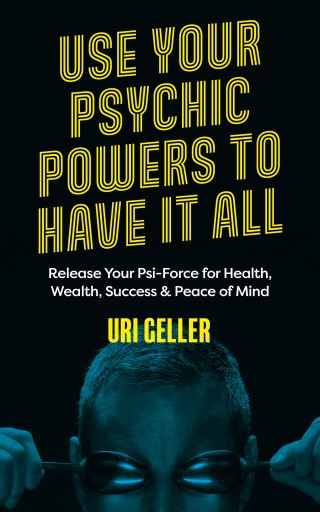 Use Your Psychic Powers to Have It All

Release Your Psi-Force for Health, Wealth, Success & Peace of Mind

Uri Geller would love to write a book revealing himself as a trickster. It would be an instant bestseller: people around the world would be thrilled to know that he really did fool the CIA and Mossad, and scientists at the Stanford Research Institute and the University of London. But he can't do it, because he knows that his psychic powers are real – just as yours are, too!

This is a guide to releasing your PSI-FORCE and using it for whatever purpose you want. Your psi-force will help you excel at sport, outsmart your boss, win at games, make friends, attract a lover, overcome illness and depression, come to terms with disaster, be a financial success, and, above all, be happy and content. But you must learn to channel your psychic powers your way. Uri will teach you how to get the best out of your particular talent using the dynamic force that is in you already, just waiting to be awakened.

The book is packed full of tests to assess your own psychic potential and progress, as well as step-by-step guidance to connecting with and using psi-force, from reading the intentions and thoughts of others to out-psyching your boss and bank manager to drawing on psi-force to manifest your desired outcomes.

Uri Geller: Uri Geller is the world’s most investigated and celebrated paranormalist. In 2017 the CIA released files describing tests of his abilities that concluded “As a result of Geller's success in this experimental period, we consider that he has demonstrated his paranormal perceptual ability in a convincing and unambiguous manner”. As well as using his dowsing gifts to detect oil and precious metals, Uri works as a motivational coach to leading sportspeople and industrialists. He has lectured at the United Nations and to the directors and CEOs of large multinational companies, such as Google, Reuters, Sony, Rolls Royce, Hallmark and many more. Find out more at:
www.urigeller.com