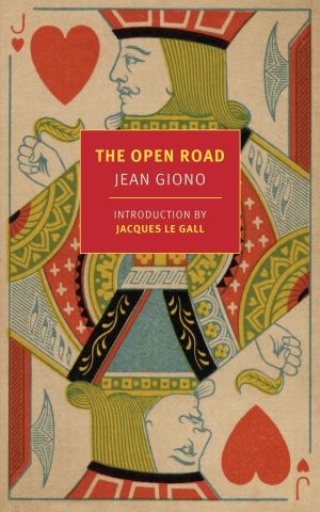 A nomad and a swindler embark on an eccentric road trip in this picaresque, philosophical novel by the author of The Man Who Planted Trees.

The south of France, 1950: A solitary vagabond walks through the villages, towns, valleys, and foothills of the region between northern Provence and the Alps. He picks up work along the way and spends the winter as the custodian of a walnut-oil mill. He also picks up a problematic companion: a cardsharp and con man, whom he calls “the Artist.”

The action moves from place to place, and episode to episode, in truly picaresque fashion. Everything is told in the first person, present tense, by the vagabond narrator, who goes unnamed. He himself is a curious combination of qualities—poetic, resentful, cynical, compassionate, flirtatious, and self-absorbed.

While The Open Road can be read as loosely strung entertainment, interspersed with caustic reflections, it can also be interpreted as a projection of the relationship of author, art, and audience. But it is ultimately an exploration of the tensions and boundaries between affection and commitment, and of the competing needs for solitude, independence, and human bonds. As always in Jean Giono, the language is rich in natural imagery and as ruggedly idiomatic as it is lyrical.

Jean Giono: Jean Giono (1895–1970) was born and lived most of his life in the town of Manosque, Alpes-de-Haute-Provence. He was elected to the Académie Goncourt in 1954. Three of his novels, Hill, Melville, and A King Alone, are available from NYRB Classics.

Paul Eprile is a publisher, poet, and translator. He was a co-winner of the 2018 Annual Translation Prize of the French-American Foundation for his translation of Jean Giono’s Melville. He lives on the Niagara Escarpment in Ontario, Canada.

Jacques Le Gall is Professor of Literature at the University of Pau and one of France's foremost interpreters of Jean Giono's works. He contributed extensively to the monumental Dictionnaire Giono.