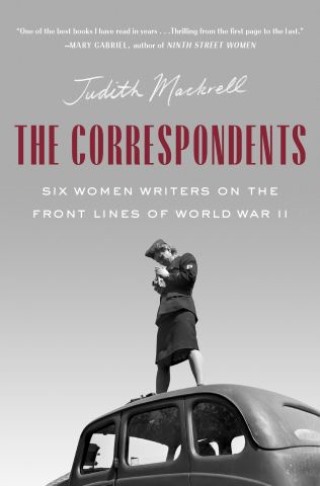 
"Thrilling from the first page to the last." —Mary Gabriel, author of Ninth Street Women

"Just as women are so often written out of war, so it seems are the female correspondents. Mackrell corrects this omission admirably with stories of six of the best…Mackrell has done us all a great service by assembling their own fascinating stories." —New York Times Book Review

On the front lines of the Second World War, a contingent of female journalists were bravely waging their own battle. Barred from combat zones and faced with entrenched prejudice and bureaucratic restrictions, these women were forced to fight for the right to work on equal terms with men.

The Correspondents follows six remarkable women as their lives and careers intertwined: Martha Gellhorn, who got the scoop on Ernest Hemingway on D-Day by traveling to Normandy as a stowaway on a Red Cross ship; Lee Miller, who went from being a Vogue cover model to the magazine’s official war correspondent; Sigrid Schultz, who hid her Jewish identity and risked her life by reporting on the Nazi regime; Virginia Cowles, a “society girl columnist” turned combat reporter; Clare Hollingworth, the first English journalist to break the news of World War II; and Helen Kirkpatrick, the first woman to report from an Allied war zone with equal privileges to men.

From chasing down sources and narrowly dodging gunfire to conducting tumultuous love affairs and socializing with luminaries like Eleanor Roosevelt, Picasso, and Man Ray, these six women are captured in all their complexity. With her gripping, intimate, and nuanced portrait, Judith Mackrell celebrates these courageous reporters who risked their lives for the scoop.

Judith Mackrell: JUDITH MACKRELL is the critically acclaimed author of The Unfinished Palazzo and Flappers. She is also a celebrated dance critic, and her biography of the ballerina Lydia Lopokova, Bloomsbury Ballerina, was short-listed for the Costa Biography Award. She also coauthored The Oxford Dictionary of Dance.