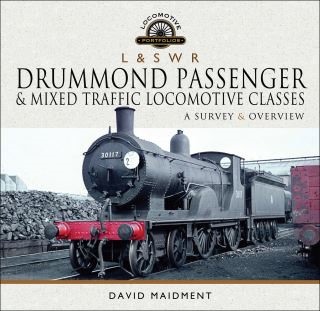 A detailed look at the nineteenth-century steam locomotive engineer and the ups and downs of his career, with numerous photos throughout.

Born in Scotland in 1840, Dugald Drummond had a long career in locomotive and railway engineering, including prominent positions on the Highland; London Brighton & South Coast Railway, North British, and Caledonian Railways, before arriving on the London & South Western Railway in the mid-1890s. There he replaced his mild-mannered and better-liked predecessor, William Adams.

As a result of his stubborn nature, Drummond died in 1912 after an accident that scalded his feet, having refused to get proper treatment. But much of his work lived on for decades, and examples are preserved today in the National Collection and on the Swanage Railway.

David Maidment:
David Maidment was a senior manager with British Railways, with widespread experience of railway operating on the Western and London Midland Regions culminating in the role of Head of Safety Policy for the BRB after the Clapham Junction train accident. He retired in 1996, was a Principal Railway Safety Consultant with International Risk Management Services from 1996 to 2001 and founded the Railway Children charity (www.railwaychildren.co.uk) in 1995. He was awarded the OBE for services to the rail industry in 1996 and is now a frequent speaker on both the charity.