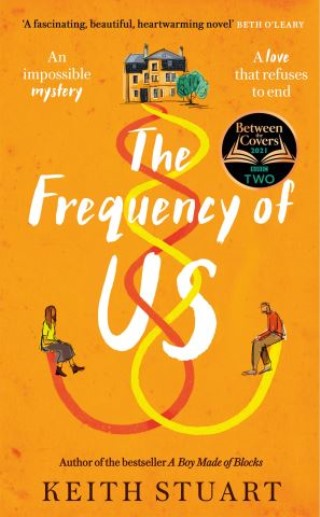 The Frequency of Us

A BBC2 Between the Covers book club pick

'A fascinating, beautiful, heartwarming novel. It kept me gripped from the very first chapter' -- BETH O'LEARY

In Second World War Bath, young, naïve wireless engineer Will meets Austrian refugee Elsa Klein: she is sophisticated, witty and worldly, and at last his life seems to make sense . . . until, soon after, the newly married couple's home is bombed, and Will awakes from the wreckage to find himself alone.

No one has heard of Elsa Klein. They say he was never married.

Seventy years later, social worker Laura is battling her way out of depression and off medication. Her new case is a strange, isolated old man whose house hasn't changed since the war. A man who insists his wife vanished many, many years before. Everyone thinks he's suffering dementia. But Laura begins to suspect otherwise . . .

From Keith Stuart, author of the much-loved Richard & Judy bestseller A Boy Made of Blocks, comes a stunning, emotional novel about an impossible mystery and a true love that refuses to die.

'The Frequency of Us is a novel with a bit of everything: a sweeping love story, wonderfully complex characters, and a sprinkling of the supernatural. I loved it, and know it'll stay with me for some time' -- CLARE POOLEY

Keith Stuart: Keith Stuart is an author and journalist. His heartwarming debut novel, A Boy Made of Blocks, was a Richard & Judy Book Club pick and a major bestseller, and was inspired by Keith's real-life relationship with his autistic son. Keith has written for publications including Empire, Red and Esquire, and is the former games editor of the Guardian. He lives with his wife and two sons in Frome, Somerset.