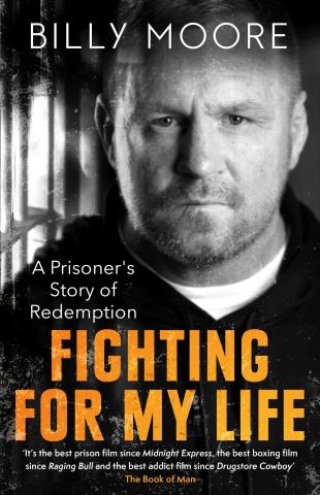 Fighting for My Life

A Prisoner's Story of Redemption

'The next round in Billy's fight is pain-racked, frank and reflective . . . an inspiring piece from a man who's been to hell and back and has the scars to prove it'
JOE COLE


'Brutally honest, dark and disturbing. A book that tells of the reality of drugs and a failing prison system'
NEIL SAMWORTH, author of Strangeways: A Prison Officer's Story

'His life may have had many ups and downs, but Billy is a wonderful example of never giving up'
JAMES ENGLISH

'This time I am telling the story of my life both before prison in Thailand and what followed once I was back in the United Kingdom, my cancer diagnosis, more prison time and, finally, redemption. I am trying to understand aspects of my childhood that had a role in my eventual downward spiral into addiction, pain, misery and loss'
BILLY MOORE

Billy Moore spent three years in Klong Prem prison in Thailand, popularly known as the 'Bangkok Hilton', where he witnessed acts of extreme violence and sexual assault. Eventually he found purpose through taking part in Muay Thai boxing tournaments in jail. Here, he found 'a wall of human community' amongst the elite boxers and regained his sobriety.

He was granted early release by the King of Thailand having excelled as a Muay Thai boxer in inter-prison tournaments. But back in the UK and a decade later - with his demons resurfacing - Billy's past caught up with him. He was caught and convicted of a burglary and was despatched to HMP Walton under then home secretary Theresa May's three-strikes rule. Billy has spent almost twenty-two years in various prisons, but since then, he has not only survived cancer, but also gone on to become a powerful advocate of boxing and anti-knife crime initiatives in the Liverpool area, training young boxers.

A Prayer Before Dawn was made into a film directed by Jean-Stéphane Sauvaire and starring Joe Cole, of Peaky Blinders' fame. The film premiered at the Cannes Film Festival in 2017, but by the time it went on general release, Billy was back in prison in the UK.

In this follow-up to Billy's first international bestseller, an autobiography set largely in Thailand's infamous prison system, Billy sets out to explore his experience of childhood abuse that would lead to a life of drug addiction and near-constant incarceration. After Billy's sentence in Klong Prem prison was commuted as a result of his extraordinary success as a Muay Thai boxer, he returned to the UK.

In this vividly told story, Liverpudlian Billy contrasts his first-hand experience of one of the cruellest prison systems in the world with his experience of UK prisons. The result is, in part, a shocking exposé of the inadequacy of care and the lack of humanity in British prisons. But Billy's story is mainly one of rehabilitation, recovery and redemption. Rich in detail, honesty and humour, his book is a fast-paced, unputdownable read which shows how the human spirit can endure and eventually thrive.

Billy Moore: BILLY MOORE was born in Liverpool in 1973. He had a difficult upbringing and struggled with addiction. In 2005, wishing to make a fresh start, Billy relocated to Thailand and entered a period of sobriety. However, he eventually relapsed and was arrested and charged by Thai police and sent to Klong Prem prison, the infamous 'Bangkok Hilton'. Billy witnessed acts of extreme violence and sexual assault. Eventually he found purpose through taking part in Muay Thai tournaments in jail. Here, he found 'a wall of human community' amongst the elite boxers and regained his sobriety. Ultimately his success as a member of the boxing team at Klong Prem led to his release. Upon release, Billy wrote about his experiences in his book, A Prayer Before Dawn which was later adapted for the screen and premiered at the Cannes Film Festival in 2017. Since then, Billy has not only survived cancer, but also gone on to become a powerful advocate of boxing and anti-knife crime initiatives in the Liverpool area. He trains young boxers and appears regularly in the national media.