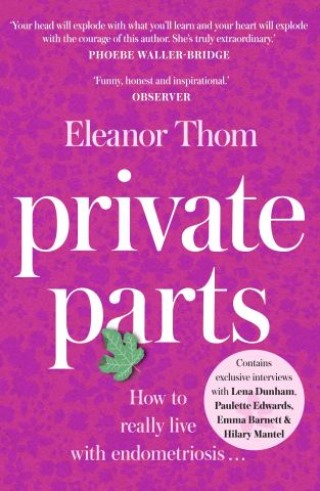 Eleanor Thom is living with endometriosis and she thinks that it's time to talk a bit more about our private parts.

Eleanor writes as fearlessly as she has fought this disease; with heart, honesty and a humour that is rarely afforded to subjects as serious as this. - Phoebe Waller-Bridge

Written for the newly diagnosed as well as those who have had more operations than they can count on one hand, Private Parts is a friend and companion to everyone whose life has been impacted by this little understood condition. It will arm you for your doctors appointments and bring light and laughter in darker times.

Features exclusive inspirational interviews with Hilary Mantel, Paulette Edwards, Lena Dunham and Emma Barnett, as well as insights from experts in the field.

**As featured in How Do You Cope with Elis + John on BBC Radio 5, available to listen to on BBC Sounds**

Eleanor Thom: Eleanor Thom was born in Sheffield, England. She graduated from Manchester University with a BA in Film and Theatre. On graduation she created the award winning, all female sketch group Lady Garden who toured the UK circuit extensively, appearing on TV and Radio and were Edinburgh Fringe Festival favourites. In 2013 she wrote and performed the critically acclaimed character stand-up show I am Bev. As an actor she has she has appeared in Absolutely Fabulous (BBC), Live At The Electric (BBC) and Drifters (Channel 4). Eleanor has written for Standard Issue Magazine and for other comedians' on their live and TV work. This is her first book. She lives in London.