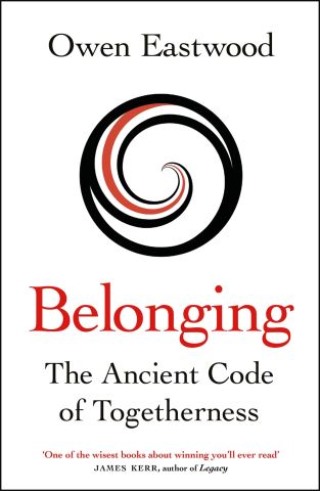 The Ancient Code of Togetherness: The book that inspired the England football team

'Belonging is a must-read for anyone interested in building a long term high-performing team.' - Stuart Lancaster

'One of the wisest books about winning you'll ever read...Powerful lessons beautifully expressed.' - James Kerr

'Fantastic. Owen's work and outlook really resonate with me. His philosophy has real depth and value.' Simon Mundie, host of Life Lessons: From Sport and Beyond

Whakapapa is a Maori idea which embodies our universal human need to belong. It represents a powerful spiritual belief - that each of us is part of an unbroken and unbreakable chain of people who share a sacred identity and culture.

Owen Eastwood places this concept at the core of his methods to maximise a team's performance. In this book he reveals, for the first time, the ethos that has made him one of the most in-demand Performance Coaches in the world.

In Belonging, Owen weaves together insights from homo sapiens' evolutionary story and ancestral wisdom. He shines a light on where these powerful ideas are applied around our world in high-performing settings encompassing sport, business, the arts and military.

Aspects of Owen's unique approach include: finding your identity story; defining a shared purpose; visioning future success; sharing ownership with others; understanding the 'silent dance' that plays out in groups; setting the conditions to unleash talent; and converting our diversity into a competitive advantage.

Owen Eastwood: Over the past decade, Owen Eastwood has worked with some of the most elite teams and groups in the world, including Gareth Southgate's England Football team, the Command Group of NATO, the South African Cricket Team, corporate leadership teams, elite ballet and the British Olympic team.