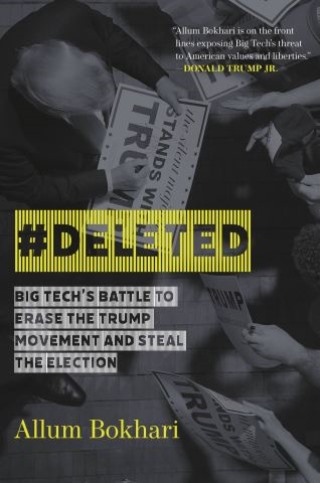 Big Tech's Battle to Erase a Movement and Subvert Democracy

Uncover the hidden systems created by the most powerful tech companies in the world that are determined to stop Donald Trump.

Journalist Allum Bokhari has spent four years investigating the tech giants that dominate the Internet: Google, Facebook, YouTube, Twitter. He has discovered a dark plot to seize control of the flow of information, and utilize that power to its full extent—to censor, manipulate, and ultimately sway the outcome of democratic elections. His network of whistleblowers inside Google, Facebook and other companies explain how the tech giants now see themselves as "good censors," benevolent commissars controlling the information we receive to "protect" us from "dangerous" speech.

They reveal secret methods to covertly manipulate online information without us ever being aware of it, explaining how tech companies can use big data to target undecided voters. They lift the lid on a plot four years in the making—a plot to use the power of technology to stop Donald Trump's re-election.

Allum Bokhari:
Allum Bokhari is an investigative tech reporter at Breitbart News. In 2018, he stunned the media when he obtained and published "The Google Tape," a 1-hour recording of Google's top executives reacting to the 2016 Trump election and declaring their intention to make the populist movement a "blip" in history. He also obtained "The Good Censor," an internal Google document admitting to censorship, Facebook's list of so-called "hate agents," and YouTube's search blacklists.
Bokhari's work has received praise from Donald Trump Jr., Fox News host Tucker Carlson, and Canadian media entrepreneur Ezra Levant. He lives in Washington, DC.