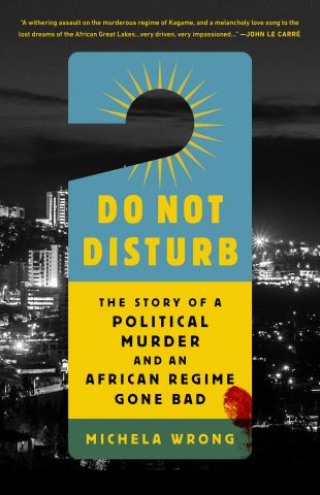 A powerful investigation into a grisly political murder and the authoritarian regime behind it: Do Not Disturb upends the narrative that Rwanda sold the world after one of the deadliest genocides of the twentieth century.

We think we know the story of Africa’s Great Lakes region. Following the Rwandan genocide, an idealistic group of young rebels overthrew the brutal regime in Kigali, ushering in an era of peace and stability that made Rwanda the donor darling of the West, winning comparisons with Switzerland and Singapore. But the truth was considerably more sinister.

Vividly sourcing her story with direct testimony from key participants, Wrong uses the story of the murder of Patrick Karegeya, once Rwanda’s head of external intelligence and a quicksilver operator of supple charm, to paint the portrait of a modern African dictatorship created in the chilling likeness of Paul Kagame, the president who sanctioned his former friend’s assassination.

Michela Wrong: Michela Wrong is a writer and journalist with more than twenty years' experience of covering Africa. She joined Reuters news agency in the early 1980s and was posted as a foreign correspondent to Italy, France and Ivory Coast. She became a freelance journalist in 1994, when she moved to then-Zaire and found herself covering both the genocide in Rwanda and the final days of dictator Mobutu Sese Seko for the BBC and Reuters. She later moved to Kenya, where she spent four years covering east, west and central Africa for the Financial Times.

She is the author of three books of non-fiction and a novel.

She was awarded the 2010 James Cameron prize for journalism that combines "moral vision and professional integrity." She is regularly interviewed by the BBC, Al Jazeera and Reuters on her areas of expertise. She has published opinion pieces and book reviews in the Observer, Guardian, Financial Times, New York Times, New Statesman, Spectator, Standpoint Foreign Policy magazine, and travel pieces for Conde Nast's Traveler magazine. She speaks fluent Italian and French. She is a consultant for the Miles Morland Foundation, which funds a range of literary festivals, workshops and scholarships for African writers.
Michela Wrong lives in London.