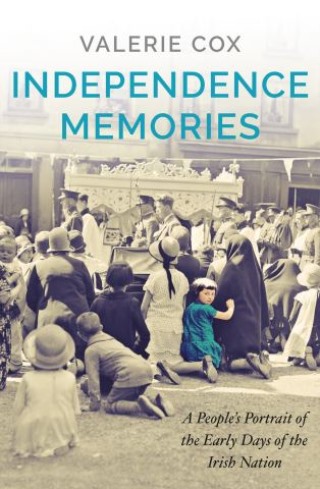 A PEOPLE'S PORTRAIT OF A PERIOD OF MOMENTOUS CHANGE IN IRISH HISTORY.

Independence Memories is a fascinating social history, from living and inherited memory, of the period surrounding Irish Independence and the Civil War.

It was a time of violence, of death, of emigration, of families divided into pro- and anti-Treaty, Michael Collins and Eamon de Valera. Against a tapestry of safe houses and mountain hide outs, people fell in love, raised families and laid the foundations of the country we live in now.

We read the story of Galwayman Michael Feerick, who rode his white horse through the streets of Dunmore, shouting 'blackguards' at the Black and Tans. We meet the two Mollys, Dublin street traders and runners for Michael Collins, who sewed bullets into the hems of their long skirts.

We relive the attack by the Black and Tans on the home of gamekeeper John Vahey and we hear from the Kavanagh family who were offered £1 for every year of the life of their 19-year-old daughter, Mary Ellen, shot dead in Buncrana.

And, memorably, 107-year-old Máirín Hughes shares fascinating recollections of being kept in school in Killarney when there was an attack on the RIC barracks down the road.

A wonderful compendium of stories and memories by Ireland's oldest citizens, from the much-loved author of Growing Up With Ireland.

In a long career as a reporter working in newspapers, radio and television, Valerie Cox has interviewed people from every county in Ireland. Over eleven years working on the Today programme on RTÉ Radio she travelled around the country covering stories as diverse as the closure of schools, Garda stations and post offices. She was out with the rescue services in floods and snow and covered the events that make rural Ireland special, including the ploughing.
She is the author of four previous books, Searching, which tells the story of Ireland's missing people, The Family Courts, A Ploughing People, and Growing Up With Ireland.
Valerie lives in rural County Wicklow with her husband Brian and the couple have five children and four grandchildren.