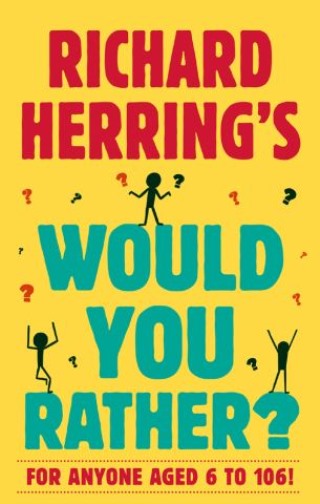 Richard Herring's Would You Rather?

The perfect boredom-busting book for long winter evenings with the family, Richard Herring's Would You Rather? is packed with hundreds of the biggest questions to face us all, including:


The questions will have the whole family, whether 6 or 106, debating on car journeys and train journeys, or stuck in on wet days during the school holidays, and will keep you entertained around the table at Christmas lunch (or when you're falling asleep after Christmas lunch...).

Fun, family-friendly and often completely bonkers, this book is a perfect gift as well as a game.

Richard Herring: Richard Herring has enjoyed phenomenal success as a writer and performer and is an innovator in the world of podcasts. Persistently placing in the Top 10 UK Comedy Podcast chart, Richard Herring's Leicester Square Theatre Podcast (RHLSTP) sees him interview top comedians in front of a live audience, with previous guests including Sir Michael Palin, Dawn French and Grayson Perry. He has written and appeared in a number of critically acclaimed plays, is a frequent guest on television panel shows, regularly tours as a stand-up comedian and was the winner of series 10 of Taskmaster. He's also won a House of Games Champion of Champions trophy. And it only took him four goes to win Pointless.