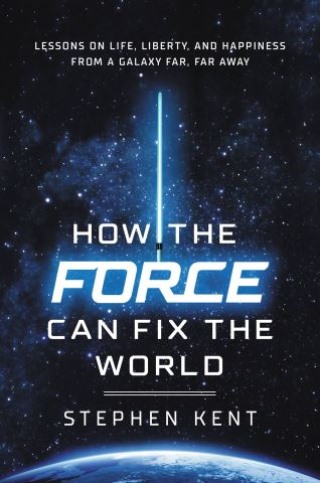 How the Force Can Fix the World

Lessons on Life, Liberty, and Happiness from a Galaxy Far, Far Away

From widespread unemployment and mounting international hostilities, every day we are swept into more political chaos—so one brave man looks to the Star Wars universe for answers to our most urgent problems.

“You can’t stop the change — anymore than you can stop the sun from setting.” Anakin Skywalker was never able to live with this wisdom shared by his mother on the day he left home to train as a Jedi Knight. That failure led him to becoming the fearsome villain we all know as Darth Vader.

We’re living in a time of unprecedented and rapid change. An age of chaos. Democracies are in decline worldwide. Dictators are ascendant. Civic organizations are crumbling. People feel lonelier and more rudderless than in any other time in recent history. We’ve tried to slow down, and in some cases we, like Anakin, have tried stop the change, but failed at every turn. The fears that come with living in an age of disruption have produced public anger, and that anger has swelled movements of hate.

Author Stephen Kent believes part of the solution is hiding in plain sight. A story that binds together multiple generations with a common language, a moral framework, and a sense of wonder. It’s Star Wars.

What if we looked to Star Wars for more than just entertainment? How the Force Can Fix the World takes this challenge on by analyzing the core principles of the Star Wars franchise: HOPE, CHOICE, HUMILITY, EMPATHY, REDEMPTION, BALANCE and rejecting FEAR. Together, these are the Star Wars roadmap for living better lives, and maybe even fostering a better politics.

The path that we’re on — where fear leads to anger, and anger to hatred — will only end in suffering. But Star Wars shows us the way back from the brink. Shared stories of virtue that are beloved across cultures and political divides are hard to come by, but Star Wars is one such story. Turn on the news; things are pretty broken right now — but the Force can fix the world.

Stephen Kent: Stephen Kent is the creator of the Beltway Banthas Star Wars & politics podcast and host of Right Now with Stephen Kent, a libertarian YouTube show on the Rightly network. He is a contributor to the Washington Examiner and has been featured in USA Today, The Federalist, Vanity Fair, The Daily Beast, Vox, and the Washington Post for entertainment and political news stories, and has been a guest on Fox Business, The Glenn Beck Program, and Al Jazeera English.