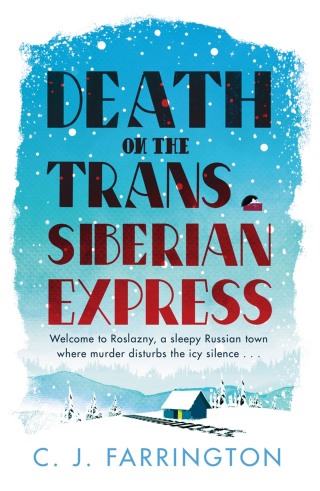 Death on the Trans-Siberian Express

Welcome to Roslazny - a sleepy Russian town where intrigue and murder combine to disturb the icy silence...

Olga Pushkin, Railway Engineer (Third Class) and would-be bestselling author, spends her days in a little rail-side hut with only Dmitri the hedgehog for company. While tourists and travellers clatter by on the Trans-Siberian Express, Olga dreams of studying literature at Tomsk State University - the Oxford of West Siberia - and escaping the sleepy, snow-clad village of Roslazny.

But Roslazny doesn't stay sleepy for long. Poison-pen letters, a small-town crime wave, and persistent rumours of a Baba Yaga - a murderous witch hiding in the frozen depths of the Russian taiga - combine to disturb the icy silence. And one day Olga arrives at her hut only to be knocked unconscious by a man falling from the Trans-Siberian, an American tourist with his throat cut from ear to ear and his mouth stuffed with 10-ruble coins. Another death soon follows, and Sergeant Vassily Marushkin, the brooding, enigmatic policeman who takes on the case, finds himself falsely imprisoned by his Machiavellian superior, Chief-Inspector Babikov.

Olga resolves to help Vassily by proving his innocence. But with no leads to follow and time running out, has Olga bitten off more than she can chew?

Praise for Death on the Trans-Siberian Express

'The book is an absolute delight, evocative equally of the frozen steppes, bad vodka and worse sausage, and full of larger than life characters. Olga Pushkin is an endearing protagonist, who is hopefully set for a series as long as the Trans Siberian Railway.' L C Tyler

'Written with a warmth that would thaw Siberia, this intriguing but charming murder mystery is packed with psychological depth and wonderfully-drawn characters. It also features the best hedgehog I've met in a novel.' Eleanor Ray

C J Farrington: Conor Farrington is a debut novelist with eclectic interests ranging from contemporary British politics to the life and work of Franz Liszt. Following a childhood in rural Scotland and degrees at St Andrews and Edinburgh Universities, Conor did a PhD in Latin American politics at Cambridge, involving extended periods of fieldwork in Ecuador and a stint as a Research Associate at Harvard University. He stayed on at Cambridge for post-doctoral work, teaching on British and American politics. Conor is a keen traveller, and the Olga Pushkin series was inspired by his experience of the Trans-Siberian railway in 2015 and the Silk Route by rail in 2017. Conor wrote the first novel in the series while on parental leave looking after his daughter Acacia. He and his family currently split their time between Cambridge and Cape Town.