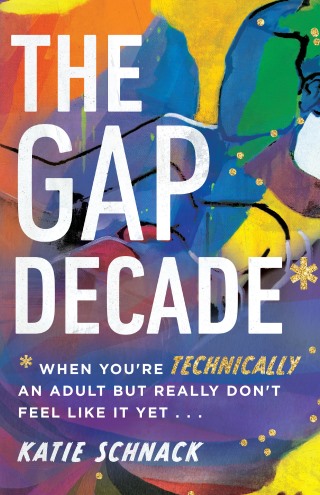 "A gap decade isn't a cute whim of a decision to take a pause and travel to Italy for a few months. Nah. A gap decade is a cluster of challenging, transitional years that the universe just dumps in your lap. And my lap. And pretty much everyone's lap. It's that twilight zone between 'young person' and 'full-blown adult' that sort of washes in, bringing with it a bit of chaos, growth, and self-discovery. It is a few years of flailing around, trying to figure out what the heck is happening as you move from not old to kinda old. From young adult to adult adult." The gap decade is that sometimes difficult transitional season young adults face in their twenties and early thirties. In this quirky and honest chronicle, Katie Schnack names the awkward realities of living in that gap between adolescence and adulthood. She and her husband go on an unpredictable journey through a decade of never-ending transitions as they make multiple moves across five states, face job interviews and tax returns, and go through anxiety, loss, pregnancy, and countless episodes of The Office.* Along the way, Schnack explores the common experiences of these young adulting years: The uncertainty of waiting when you're stuck and don't know what steps to take. Learning to trust in God's provision when you are broke like a joke. Admitting your need for help when panic attacks strike. And discovering a life full of grace and joys that can't be ordered via two-day delivery. *Katie has binged all nine seasons of The Office—four times. Don't do the math about how many hours of TV that is. She doesn't want to know.

Katie Schnack: Katie Schnack is a writer and book publicist. Her articles have appeared in such places as Relevant, Today.com, Hello Giggles, Romper, and Scary Mommy. She grew up in Minnesota playing duck duck gray duck, learned to say "bless your heart" in Texas, lived in a four-hundred-square-foot apartment in New York (okay, Jersey City, actually, but it was close enough to Manhattan), and has a love-hate relationship with Cheetos but is also oddly obsessed with spinach smoothies. Katie and her family now live in West Palm Beach, Florida, on an acre of land with five chickens, three goats, and a senior mini pony.