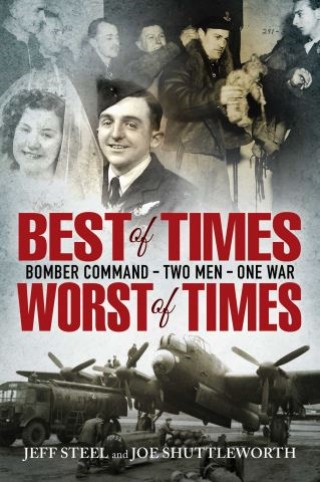 Joe’s love of flying and adventure led him to volunteer for active service: dropping bombs on Nazi Germany. Tom’s hatred of Hitler’s vile regime brought him to the same point. The war was to throw Joe and Tom together. Within a few desperate seconds, on the way to Berlin a night-fighter attack would rip them apart.

Best of Times Worst of Times tells the story of two very different men but with a single vocation: to put the Nazi war machine out of action. Each would describe themselves as ordinary men. For each, in their different ways, their wartime experience was extraordinary.
For Joe fate would bring the best of times. He would cross the Atlantic on the Queen Elizabeth. He would find the woman to whom he would be married for the rest of his life. As a gunner on a Lancaster Bomber he would enjoy the camaraderie of a band of brothers on a wartime bomber station and high status among the wartime population. For Tom, fate decreed the worst of times. He would be thrown out of an exploding plane to survive; then be sentenced to death by the French resistance for being a Nazi stooge.  He would know the horror of betrayal by someone he trusted and thrown into the hands of the Nazi secret police. He would know abject fear of the living death within the Buchenwald concentration camp.  He would become one of very few people ever to leave it – and that in the most dramatic of circumstances.

Jeff Steel:
Jeff Steel is a child of World War II London and is now based in Melbourne. His deep interest in the war has led to many heart-rending interviews with those who took part. His first book 'No Heil Hitler' as ghost writer, told the compelling story a young boy's Odyssey through the horrors of Nazi-occupied Poland. It won the Philpott Prize for a (then) unpublished manuscript. His recent WWII titles – Bombs and Barbed Wire and Best of Times, Worst of Times – both true stories of Bomber Command, were published by BSP in 2021.
|||
Joe Shuttleworth grew up in Sherwood, close to Archerfield Airport near Brisbane, Australia. In 1941, at the age of 19, he applied to join the Royal Australian Air Force and was accepted in 1942. He later qualified as a rear gunner and flew operations in a Lancaster Bomber over the Third Reich. He survived, married Freda, and upon his return to Australia, worked in managerial roles in an engineering company. He later worked in services’ repatriation hospitals in Brisbane and Melbourne. He was recognised with an MBE for achievements at the Heidelberg Repatriation Hospital in Melbourne. Joe passed away in 2019.