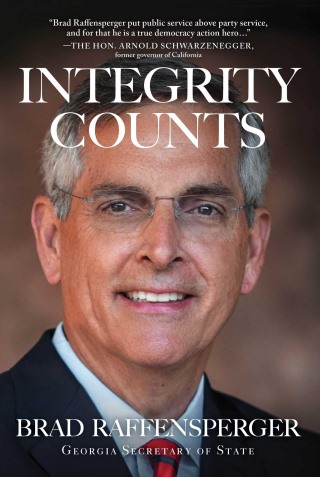 In Integrity Counts, lifelong Republican and Georgia Secretary of State Brad Raffensperger speaks out against the former president’s false claims of voter fraud in the 2020 election and hopes to restore confidence and trust in our country’s elections.

“Brad Raffensperger put public service above party service, and for that he is a true democracy action hero, and he is also my hero. His book serves as a reminder that American democracy is bigger than any individual candidate or election.”
—THE HON. ARNOLD SCHWARZENEGGER, former governor of California

Integrity stands as the cornerstone of American democracy.

Brad Raffensperger, Georgia Secretary of State, defended American democracy by refusing to bend to demands that he change the legitimate results of the 2020 presidential election in his state.

Raffensperger’s defense of democracy made him a target of President Donald Trump for months following the election, culminating in an hour-long phone call in which the president told him, “I just want to find 11,780 votes,” the exact number he needed to win Georgia’s sixteen Electoral College votes. Once again, Raffensperger refused. Georgia voters had spoken.

A lifelong conservative Republican who had financially supported President Trump’s reelection campaign and voted for Trump, Raffensperger called for a hand recount of every vote to confirm the results and affirm the integrity of Georgia’s election. Still President Trump persisted in his personal attacks.

One of the most troubling questions in the wake of the 2020 election, Raffensperger says, is whether America will see every candidate who loses a major election refuse to accept the results and, instead, set out to raise money and build support on unfounded claims of fraud and corruption. To avoid that prospect, Americans must come to terms with the scope of the problem, but doing so won’t be comfortable for either party.

Either party because the 2020 crisis was not unprecedented in Georgia. By November 2020, Raffensperger had been challenging the claims of a “stolen election” for nearly two years. In the fall of 2018, after Democrat Stacey Abrams lost the race for governor of Georgia, she told a crowd of supporters, “So, to be clear, this is not a speech of concession. Concession means to acknowledge an action is right, true, or proper. As a woman of conscience and faith, I cannot concede.”

The similarities don’t end there, and when considered with some care, they paint a troubling picture of an all-too-bipartisan willingness to undermine the integrity of our democracy, and the public’s confidence in it, for the sake of personal and partisan gain.

Brad Raffensperger: Georgia Secretary of State Brad Raffensperger is a structural engineer who lives by the precept that numbers don’t lie. He’s a lifelong conservative Republican and a successful businessman, founder and CEO of Tendon Systems, LLC, which provides high-strength steel for construction projects. Tendon Systems has nearly 150 employees and works on projects in more than twenty-five states.

Brad entered politics for the first time at the age of fifty-six, when he was elected to the City Council in Johns Creek, Georgia. Three years later he was elected to the Georgia House of Representatives, where he served for two terms, and in 2018 Georgia voters elected him secretary of state. He immediately went to work shoring up Georgia’s election system, which relied on sixteen-year-old paperless machines. Brad oversaw the purchase and statewide implementation of new voting machines that generated verifiable paper ballots to allow for physical ballot auditing and a hand recount if necessary, and ensured that machines were in place for the 2020 election.