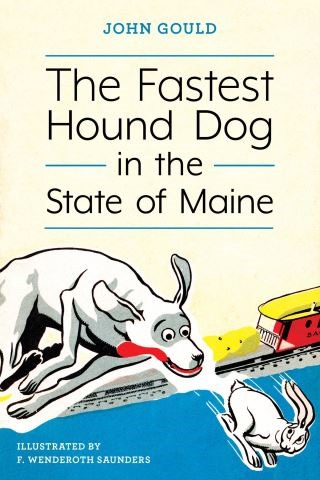 The Fastest Hound Dog in the State of Maine

Part fable, part folklore, The Fastest Hound Dog in the State of Maine is Yankee story telling at its very best. A man needs a dog to catch long-legged rabbits, so he buys a hound with longer legs than the rabbits. It's the fastest dog he's ever seen--the fastest dog anyone has ever seen. The dog is so fast, in fact, the man takes on the Bangor & Aroostook Railroad in some friendly competition. Hilarity ensues.

Based on Maine folklore, and told as only John Gould can tell it, this story rightfully belongs to the times before television, before radio, when folks sat and talked and told stories. Yet it is a story for all times with its humor--warm as a Maine hearth--and distinct Yankee voice.

Born and bred in Maine, John Gould (1908-2003) was well known for his acerbic Yankee wit. Over his life he wrote dozens of books and for an astounding sixty-two years was a regular columnist for the Christian Science Monitor. Despite his literary fame, he would always claim that he was, first, last, and always, a farmer.