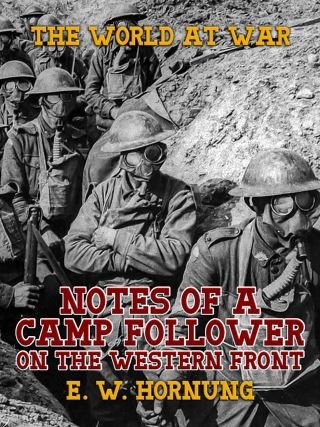 Notes of a Camp Follower on the Western Front

Excerpt: "'There's our hut!' said the young hut-leader, pointing through iron palings at a couple of toy Noah's Arks built large. 'No—that's the nth Division's cinema. The Y.M.C.A. is the one beyond.' The enclosure behind the palings had been a parade-ground in piping times; and British squads, from the pink French barracks outside the gates, still drilled there between banks of sterilised rubbish and lagoons of unmedicated mud. The place was to become familiar to me under many aspects. I have known it more than presentable in a clean suit of snow, and really picturesque with a sharp moon cocked upon some towering trees, as yet strangely intact. It was at its best, perhaps, as a nocturne pricked out by a swarm of electric torches, going and coming along the duck-boards in a grand chain of sparks and flashes. But its true colours were the wet browns and drabs of that first glimpse in the December dusk, with the Ark hull down in the mud, and the cinema a sister ship across her bows. The hut-leader ushered me on board with the courtesy of a young commander inducting an elderly new mate; the difference was that I had all the ropes to learn, with the possible exception of one he had already shown me on our way from the local headquarters of the Y.M.C.A. The battered town was full of English soldiers, to whom indeed it owed its continued existence on the right side of the Line. In the gathering twilight, and the deeper shade of beetling ruins, most of them saluted either my leader's British warm, or my own voluminous trench-coat (with fleece lining), on the supposition of officers within. Left to myself, I should have done the wrong thing every time. It is expressly out of order for a camp-follower to give or take salutes. Yet what is he to do, when he gets a beauty from one whose boots he is unfit to black? My leader had been showing me, with a pleasant nod and a genial civilian gesture, easier to emulate than to acquire."

E. W. Hornung: Ernest William Hornung (7 June 1866 – 22 March 1921) was an English author and poet known for writing the A. J. Raffles series of stories about a gentleman thief in late 19th-century London. Hornung was educated at Uppingham School; as a result of poor health he left the school in December 1883 to travel to Sydney, where he stayed for two years. He drew on his Australian experiences as a background when he began writing, initially short stories and later novels.