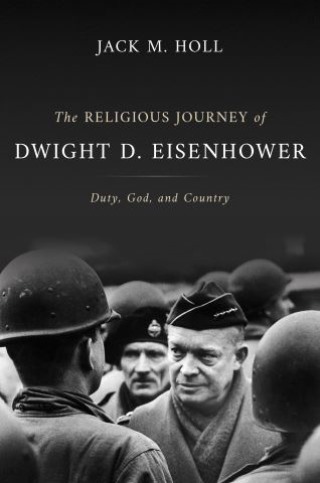 “Our form of government has no sense unless it is founded in a deeply felt religious faith, and I don’t care what it is. With us, of course, it is the Judeo-Christian concept, but it must be a religion that all men are created equal.”

So said Dwight D. Eisenhower shortly after being elected president of the United States in 1952. Although this statement has been variously interpreted, it reflects one of his fundamental guiding principles: that for a country to thrive, it needs a shared identity, formed through common values, history, and purpose. For Eisenhower, this could be found most distinctly in shared faith—a concept that came to be known as American civil religion, which defined and drove much of the cohesion of the 1950s under Eisenhower’s leadership.

This biography tells the story of how deeply religious convictions ran through every aspect of Eisenhower’s public life: his decision to become a soldier, his crusade against fascism and communism, his response to the civil rights movement, his belief that only he as president could lead America through the Cold War, and his search for nuclear peace. Having been brought up in a devout family—first as part of the River Brethren and later Jehovah’s Witnesses—Eisenhower continued to see the world in terms of a dialectical struggle between divine and demonic forces throughout his life, even after joining the Presbyterian church. This perspective shaped his public image as a general in World War II and as president during some of the coldest years of the Cold War, when cultural differences between the atheistic Soviet Union and the religiously grounded United States began crystallizing.

As Eisenhower’s historical standing continues to rise, and his contrast with the modern Republican Party deepens, Jack Holl’s study of this consequential figure of twentieth-century American history shines a spotlight on what has changed in the intervening years. What can be learned from the religious outlook of a public servant who embraced moderation instead of partisan division? Which beliefs and convictions led a former general to a position of skepticism against the military-industrial complex? With the role of faith in American political life still a hotly debated topic today, Eisenhower’s religious journey is worth renewed attention.

Jack M. Holl:
Jack M. Holl has served as a professor of history at Williams College, the University of Washington, and Kansas State University. A public historian at the US Atomic Energy Commission and the Department of Energy, he played a leading role in the founding of the Society for History in the Federal Government and launching the National Council of Public History. He has also served at the Eisenhower Foundation and continues to evaluate Eisenhower Foundation research grants at the Dwight D. Eisenhower Presidential Library.