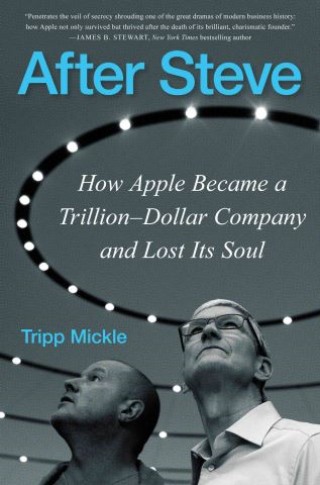 How Apple Became a Trillion-Dollar Company and Lost Its Soul

From the New York Times' Tripp Mickle, the dramatic, untold story inside Apple after the passing of Steve Jobs by following his top lieutenants—Jony Ive, the Chief Design Officer, and Tim Cook, the COO-turned-CEO—and how the fading of the former and the rise of the latter led to Apple losing its soul.

Steve Jobs called Jony Ive his “spiritual partner at Apple.” The London-born genius was the second-most powerful person at Apple and the creative force who most embodies Jobs’s spirit, the man who designed the products adopted by hundreds of millions the world over: the iPod, iPad, MacBook Air, the iMac G3, and the iPhone. In the wake of his close collaborator’s death, the chief designer wrestled with grief and initially threw himself into his work designing the new Apple headquarters and the Watch before losing his motivation in a company increasingly devoted more to margins than to inspiration.

In many ways, Cook was Ive’s opposite. The product of a small Alabama town, he had risen through the ranks from the supply side of the company. His gift was not the creation of new products. Instead, he had invented countless ways to maximize a margin, squeezing some suppliers, persuading others to build factories the size of cities to churn out more units. He considered inventory evil. He knew how to make subordinates sweat with withering questions.

Jobs selected Cook as his successor, and Cook oversaw a period of tremendous revenue growth that has lifted Apple’s valuation to $2 trillion. He built a commanding business in China and rapidly distinguished himself as a master politician who could forge global alliances and send the world’s stock market into freefall with a single sentence.

Author Tripp Mickle spoke with more than 200 current and former Apple executives, as well as figures key to this period of Apple’s history, including Trump administration officials and fashion luminaries such as Anna Wintour while writing After Steve. His research shows the company’s success came at a cost. Apple lost its innovative spirit and has not designed a new category of device in years. Ive’s departure in 2019 marked a culmination in Apple’s shift from a company of innovation to one of operational excellence, and the price is a company that has lost its soul.

Tripp Mickle is a technology reporter for The New York Times covering Apple. He previously covered the company for the Wall Street Journal, where he also wrote about Google and other Silicon Valley giants. He has appeared on CNBC and NPR, and previously worked as a sportswriter. He lives with his wife and German shorthaired pointer in San Francisco.