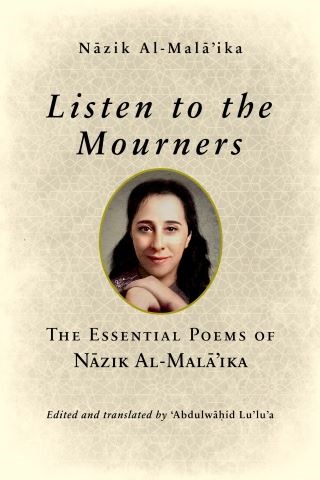 Listen to the Mourners

This is one of the first book-length English translations of Nāzik Al-Malā’ika’s Arabic poetry.

One of the most influential Iraqi poets of the twentieth century, Nāzik Al-Malā’ika pioneered the modern Arabic verse movement when she broke away from the formalistic classical modes of Arabic poetry that had prevailed for more than fifteen centuries. Along with ʻAbdulwahhāb Al-Bayyāti and Badre Shākir Al-Sayyāb, she paved the way for the birth of a new modernist poetic movement in the Arab world.

Until now, very little of Al-Malā’ika’s poetry has been translated into English. Listen to the Mourners contains forty of her most significant poems selected from six published volumes, including Life Tragedy and a Song for Man, The Woman in Love with the Night, Sparks and Ashes, The Wave’s Nadir, The Moon Tree, and The Sea Alters Its Colours. These poems show the beginning of her development from the late romantic orientation in Arabic poetry toward a more psychological approach. Her poetic form shows a significant liberation from the traditional two-hemistich line in traditional Arabic poetry, which adheres to the traditional Arabic measures of prosody and rhyme. ‘Abdulwāḥid Lu’lu’a’s introduction functions as a critical analysis of the liberated verse movement of the era and situates the poet among her Arab and Western counterparts. This accessible, beautifully rendered, and long overdue translation fills a gap in modern Arabic poetry in translation and will interest students and scholars of Iraqi literature, Middle East studies, women’s studies, and comparative literature.

Nāzik Al-Malā’ika (1923–2007) was an Iraqi poet and is considered by many to be one of the most influential contemporary Iraqi female poets. She taught at a number of schools and universities, most notably at the University of Baṣrah and Kuwait University.