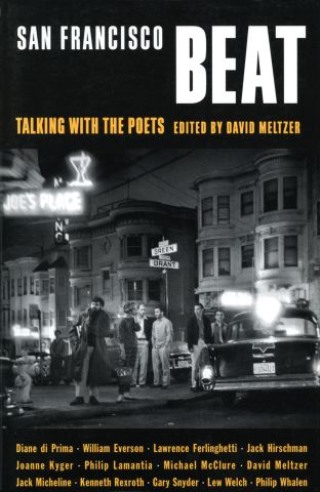 Talking with the Poets

San Francisco Beat is an essential archive of the Beat Generation, a rich moment in a fortunate place. America, somnolent, conformist and paranoid in the 1950s, was changed forever by a handful of people who refused an existence of drudgery and enterprise, opting instead for a life of personal, spiritual and artistic adventure. In these intimate, free-wheeling conversations, a baker's dozen of the poets of San Francisco talk about the scene then and now, the traditions of poetry, and about anarchism, globalism, Zen, the Bomb, the Kabbalah and the Internet.

" . . . as we begin to slip into a national slumber somewhat akin to that of the Eisenhower years, it’s exhilarating to have this squall line of Beats pass through our consciousness."—Kirkus Reviews

David Meltzer (1937-2016) was the author of many books of poetry, including Tens, The Name, Arrows: Selected Poetry 1957-1992 and Two-Way Mirror (City Lights). He was the editor of Birth, The Secret Garden, Reading Jazz and Writing Jazz, among other collections. His agit-smut fictions include The Agency Trilogy. Meltzer read poetry at the Jazz Cellar in the 1950s and in the 1960s fronted the band, "Serpent Power."