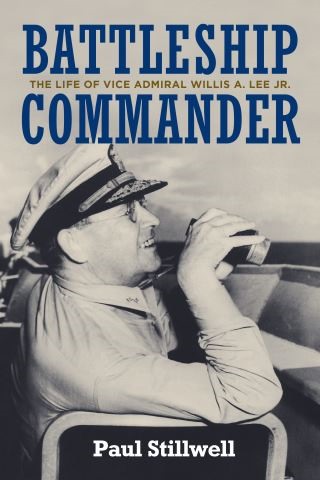 The Life of Vice Admiral Willis A. Lee Jr.

This is the first-ever biography of Vice Admiral Willis A. Lee Jr., who served a key role during World War II in the Pacific. Recognizing the achievements and legacy of one of the war’s top combat admirals has been long overdue until now. Battleship Commander explores Lee’s life from boyhood in Kentucky through his eventual service as commander of the fast battleships from 1942 to 1945. Paul Stillwell draws on more than 150 first-person accounts from those who knew and served with Lee from boyhood until the time of his death. Said to be down to earth, modest, forgiving, friendly, and with a wry sense of humor, Lee eschewed the media and, to the extent possible, left administrative details to others. Stillwell relates the sequential building of a successful career, illustrating Admiral Lee’s focus on operational, tactical, and strategic concerns. During his service in the Navy Department from 1939 to 1942, Lee prepared the U.S. Navy for war at sea, and was involved in inspecting designs for battleships, cruisers, aircraft carriers, and destroyers. He sent observers to Britain to report on Royal Navy operations during the war against Germany and made plans to send an action team to mainland China to observe conditions for possible later Allied landings there. Putting his focus on the need to equip U.S. warships with radar and antiaircraft guns, Lee was one of the few flag officers of his generation who understood the tactical advantage of radar, especially during night battles. In 1942 Willis Lee became commander of the first division of fast battleships to operate in the Pacific.During that service, he commanded Task Force 64, which achieved a tide-turning victory in a night battle near Guadalcanal in November 1942. Lee missed two major opportunities for surface actions against the Japanese. In June 1944, in the Marianas campaign, he declined to engage because his ships were not trained adequately to operate together in surface battles. In October 1944, Admiral William Halsey’s bungled decisions denied Lee’s ships an opportunity for combat. Continuing his career of service near the end of the war, Lee, in the summer of 1945, directed anti-kamikaze research efforts in Casco Bay, Maine. While Lee’s wartime successes and failures make for compelling reading, what is here in this biography is a balanced look at the man and officer.