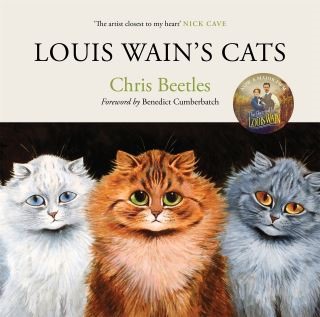 'Louis Wain invented a cat style, a cat society, a whole cat world'. Broadcast in 1925 by H.G. Wells, these words characteristically foretold the future of the Wain cat which has, once more, become the century's most recognisable image in cat art. During their heyday, in the time before the First World War, Louis Wain's cats, dressed as humans, portrayed that stylish Edwardian world having fun: at restaurants and tea parties, going to the Race and the Seaside, celebrating at Christmas and Birthdays, and disporting themselves with exuberant games of tennis, bowls, cricket and football. This is a titillating world of cats at play, uninhibited and slightly dangerous, with most group activities likely to turn into mishap, mayhem and catastrophe. This is Wain's world, funny, edgy and animated: a whole cat world. The first comprehensive exhibition of Wain's work was held at the Victoria and Albert Museum in London in 1972 and, since then, Louis Wain has steadily become more fashionable, and collected worldwide. This biography contains 300 plates of richness and variety, all of which are reproduced faithfully from the original artwork. This book is jointly published by Chris Beetles Ltd and Canongate Books.

Chris Beetles: Chris Beetles is a foremost dealer in British art, with a world-leading specialisation in cartoons and illustrations. Many and regular exhibitions at his gallery in St James’s, London, and their attendant publications have done much to promote illustrative artwork over the last three decades. The Royal College of Art appointed him an Honorary Fellow in 2003 in recognition of his services to Illustration. Since 1983, Chris Beetles has proved the main populariser of Louis Wain through a series of annual shows. He is now recognised as the leading authority on the artist, and is regularly approached by museums, auctions and collectors to adjudicate on the authenticity of the many works that appear on the market. chrisbeetles.com