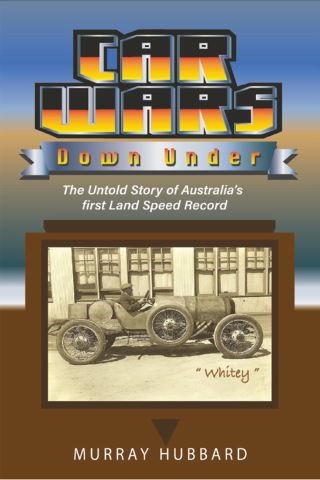 Car Wars Down Under

A rollicking ride through the early days of Australian Motorsport set in 1900-1918 in Perth, Melbourne, Brisbane and the Gold Coast, the true story of bitter rivalry between two Brisbane car importers/dealers: E.G.Eager Son and Canada Cycle and Motor (CCM). There are four main characters: Fred Z. Eager, Alec Fraser Jewell, E.G.Eager and CCM managing director A.V.Dodwell.
The paths of speedsters Fred Eager and Alec Jewell collide on Christmas Day, 1916, on Southport Beach at the first attempt to set an Australian land speed record.
Whitey in the premier motorsport event of hill climbs so they decided to stage an event of their own, bespoke for Studebaker. This race would nullify Fred Eagers driving skills and suit the big-engined Studey: A straight line speed contest against the clock on the firm low-tide sand of Southport (Surfers Paradise) beach. Only one of them could win ... Or could they?