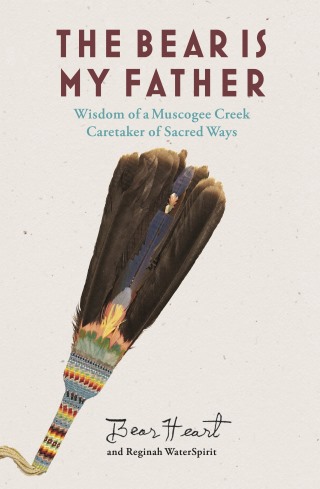 The Bear is My Father

Indigenous Wisdom of a Muscogee Creek Caretaker of Sacred Ways

The Bear Is My Father is a celebration of the life, teachings, and legacy of Marcellus Bear Heart Williams. It follows the critically-acclaimed book, The Wind Is My Mother, which has been translated into 14 languages today. Globally renowned, Bear Heart was one of the last traditionally trained medicine persons of the Muscogee Creek Nation. Weaving together the knowledge of many traditions, Bear Heart was an ordained American Baptist Minister, Road Chief, and renowned spiritual counselor. Speaking in 13 Native American tribal languages, Bear Heart was considered a Multi-Tribal Spiritual Leader and was called upon internationally for his healing work. The Bear Is My Father contains the final words Bear Heart wrote before his "going on," with contributions from friends and family whose lives had been forever changed by his presence and work. It is co-authored by Reginah WaterSpirit, Bear Heart's Medicine Helper and wife of 23 years. When Reginah would ask Bear Heart exactly how he made his medicine, he always answered, “I don’t make the medicine, it was here before me. I’ve been entrusted to be a caretaker of certain sacred ways.”

Bear Heart: Marcellus Bear Heart Williams was born a full-blooded member of the Muscogee Nation, Creek Tribe in Okemah, Oklahoma. Bear Heart studied Creek medicine for 14 years under two medicine men of his tribe and was one of the last traditionally trained "medicine persons." He was a Roadman in the Native American Church, Baptist Minister, World War II veteran, and internationally respected advisor. He spoke 14 languages, 13 of them Native. Bear Heart received formal education from the all-Indian Bacone College in Muscogee, Oklahoma and earned a divinity degree from Andover Newton Theological Seminary in Boston, Massachusetts with a major in Biblical Greek. Because of his intense curiosity, breadth of experience, and open heart, his counsel and advice were widely sought. He prayed with President Truman, spoke at the opening of the Smithsonian Native American Museum, and was a spiritual counselor for firemen and their families after the Oklahoma City tragedy in 1985. He served on President Bush's Faith-Based Initiative Panel for the US Department of Health's "When Terror Strikes" conference in New York, and put down prayers with police and firemen at Ground Zero in New York City. Bear Heart’s first book, The Wind Is My Mother, has been translated into 14 languages. His medicine helper and wife, Reginah Water Spirit, co-authored The Bear is My Father, his second book. Bear Heart passed away on August 4, 2008, and was buried in his hometown of Okemah, Oklahoma.|||Reginah was born in The Bronx, New York and moved to Southern California at three years old. She owned and operated a number of garment industry related businesses, attended UCLA, and traveled extensively in the USA and Europe as a young adult. Reginah studied the Voice Dialogue method for several years with Dr. Sidra Stone and the late Dr. Hal Stone, eventually becoming a facilitator and teacher in this field. Her interest in psycho-spiritual paths led her to New Mexico and eventually to Marcellus Bear Heart Williams, member of the Muskogee (Creek) Nation. At the age of 42, Reginah began a very different life with Bear Heart. She worked with him as a medicine helper while they traveled in the United States, Europe, Mexico and Canada for 23 years. They eventually married in a spiritual ceremony in Oklahoma. Today she uses Voice Dialogue and art therapy tools to help expand awareness of Self and our relationships. She is a member of The Earth Tribe, an Earth-based community committed to the necessary truth that humans are but one among all species.