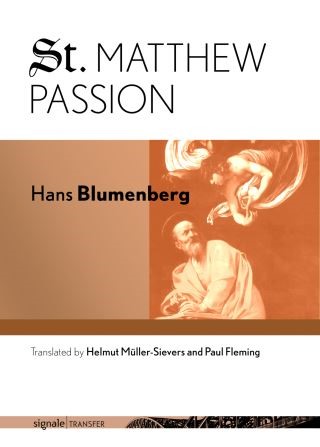 St. Matthew Passion is Hans Blumenberg's sustained and devastating meditation on Jesus's anguished cry on the cross, "My God, my God, why have you forsaken me?" Why did this abandonment happen, what does it mean within the logic of the Gospels, how have believers and nonbelievers understood it, and how does it live on in art? With rare philological acuity and vast historical learning, Blumenberg unfolds context upon context in which this cry has reverberated, from early Christian apologetics and heretics to twentieth-century literature and philosophy.

Blumenberg's guide through this unending story of divine abandonment is Johann Sebastian Bach's monumental Matthäuspassion, the parabolic mirror that bundled eighteen hundred years of reflection on the fate of the crucified and the only available medium that allows us post-Christian listeners to feel the anguish of those who witnessed the events of the Passion. With interspersed references to writers such as Goethe, Rilke, Kafka, Freud, and Benjamin, Blumenberg gathers evidence to raise the singular question that, in his view, Christian theology has not been able to answer: How can an omnipotent God be so offended by his creatures that he must sacrifice and abandon his own Son?

Hans Blumenberg (1920–1996) was one of the most important German philosophers of the twentieth century. Among his many books that have been translated into English are Paradigms for a Metaphorology and Rigorism of Truth.

Helmut Müller-Sievers is Professor of German at the University of Colorado, Boulder, and author of several books, including The Science of Literature.

Paul Fleming is the L. Sanford and Jo Mills Reis Professor of Humanities and the Taylor Family Director of the Society for the Humanities at Cornell University. He is author of The Pleasures of Abandonment and Exemplarity and Mediocrity.