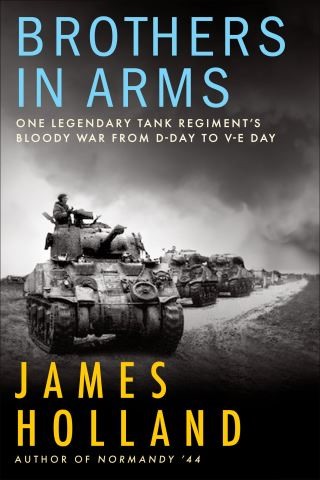 The renowned historian and author of Normandy ’44 recounts the operations and personal experiences of the legendary Sherwood Rangers during WWII.

One of the last cavalry units to ride horses into battle, the Sherwood Rangers were transformed into a “mechanized cavalry” of tanks in 1942. After winning acclaim in the North African campaign, they spearheaded one of the D-Day landings in Normandy and became the first British troops to cross into Germany. Their courage, skill and tenacity contributed mightily to the surrender of Germany in 1945.

Brothers in Arms introduces heroes such as Commanding Officer Stanley Christopherson, squadron commander John Semken, Sergeant George Dring, and others who helped their regiment earn the most battle honors of any in British army history. Weaving their exploits into the larger narrative of D-Day to V-E Day, Holland offers fresh analysis and perspective on the endgame of WWII in Europe.

James Holland:
One of WWII’s finest historians, James Holland is the author of Sicily ’43, Normandy ’44, Big Week, The Rise of Germany and The Allies Strike Back in the War in the West trilogy, and Dam Busters. He has written and presented the BAFTA shortlisted documentaries Battle of Britain and Dam Busters for the BBC, and his WWII podcast, We Have Ways of Making You Talk, now has millions of listeners.
griffonmerlin.com
@james1940