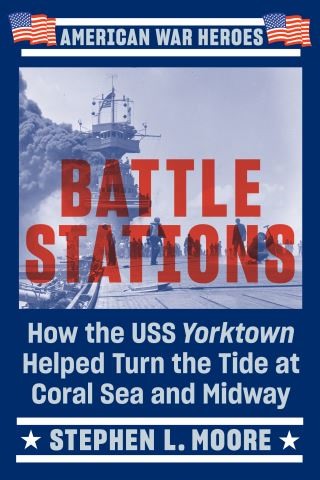 The true story of the valiant men who gave their all to save the aircraft carrier USS Yorktown—and changed the course of the Pacific War.

On June 4, 1942—six months after the attack on Pearl Harbor—Yorktown’s crew began the carrier’s final battle against Japan’s infamous aircrafts. Hotshot fighter pilot Lieutenant Scott McCuskey attacked from the air in his Wildcat, becoming the Navy’s second-ever “ace in a day.” Carpenter Boyd McKenzie worked tirelessly to repair Yorktown before a fresh air strike. Critically injured gun crew member George Weise fought for his life as the ship threatened to capsize. Meanwhile, Pharmacist’s Mate Second Class Warren Heller raced to save the lives of bloodied gunners and sailors by evacuating them before time ran out.

The stories of these heroes and many other brave servicemen bring the gripping narrative of Yorktown’s final thirty days to life, as she fights in the near back-to-back Battles of Coral Sea and Midway. Through unpublished memoirs and interviews with Yorktown’s last surviving veterans, acclaimed author Stephen L. Moore offers up a new and compelling amount of a pivotal month in World War II, while honoring the courage of those who served.

Stephen L. Moore: Stephen L. Moore is a sixth generation Texan and graduated from Stephen F. Austin State University, where he studied advertising, marketing, and journalism. He is the author of twenty previous books on World War II and Texas history, including As Good as Dead, Pacific Payback, and The Battle for Hell’s Island. Steve lives with his three children and his wife, Cindy, north of Dallas in Lantana, Texas.