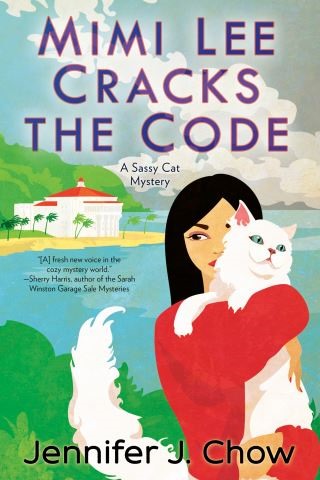 One of BookRiot's Best Upcoming Cozy Mysteries for the Second Half of 2021!

When murder follows Mimi Lee to her romantic island getaway, she puts on her best sleuthing hat with her sassy cat in tow in this adventurous cozy mystery by Jennifer J. Chow.

Mimi Lee just found an extra perk to being a pet groomer at Hollywoof (other than cuddling animals all day long, that is). Pixie St. James, one of Mimi’s clients and the investor behind Hollywoof, has offered her and her boyfriend, Josh, a getaway at her vacation home, nestled on beautiful Catalina Island. With the island just outside of Los Angeles but still far enough from the hustle and bustle, Mimi, Josh, and their cat Marshmallow (who, of course, wouldn’t be caught dead in a dingy pet hotel) are excited for their relaxing stay.

That is, until Pixie’s last renter, Davis D. Argo, turns up dead. Mimi and Josh’s romantic getaway immediately turns into an enormous buzzkill, especially when Pixie asks Mimi for help. The police suspect Pixie, and Mimi knows a thing or two about wrongful allegations. Mimi figures it couldn’t hurt to snoop a little since she’s already there, and soon discovers that a valuable item is missing. Except Pixie isn’t the only one in the neighborhood who has been robbed. There is something strange happening on the island, and Mimi won’t stop until she finds out what it is.