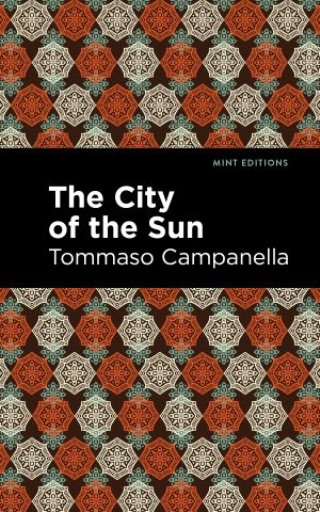 The City of the Sun

The City of the Sun (1602) is a work of utopian fiction by Tommaso Campanella. Written while the author was imprisoned in Naples for his role in a conspiracy against Spanish rule in Calabria, The City of the Sun is regarded as an essential work of Renaissance political philosophy. Written in the tradition of Plato’s Republic and Timaeus, the text imagines a peaceful society ruled by a theocratic monarchy and dedicated to communal values. “It is divided into seven rings or huge circles named from the seven planets, and the way from one to the other of these is by four streets and through four gates, that look toward the four points of the compass.” Built with perfection in mind, the City of the Sun is organized from the largest details down to the smallest. Each citizen is employed, and no occupation is held in higher esteem than another. There are no servants, four-hour workdays, and no private goods or possessions. Everyone abides by a strict set of rules designed to keep them happy and healthy, and important decisions are made only after a painstaking analysis of the planets and stars has been performed. Written in dialogue form, The City of the Sun has intrigued and informed generations of political thinkers around the world. With a beautifully designed cover and professionally typeset manuscript, this edition of Tommaso Campanella’s The City of the Sun is a classic work of Italian literature reimagined for modern readers.

Tommaso Campanella (1568-1639) was an Italian philosopher, poet, astrologer, and Dominican friar. Born Giovanni Domenico Campanella in Calabria, he was the son of a cobbler. At fourteen, he entered the Dominican Order and took the name Tommaso after Thomas Aquinas. His early studies in theology and philosophy led him to the empiricism of Bernardino Telesio, a prominent Italian scientist of the sixteenth century. By 1590, Campanella was studying astrology in Naples, where he gained a reputation for heterodoxy and faced persecution during the Roman Inquisition. Arrested in Padua in 1594, he spent several years in confinement at a Roman convent before earning his freedom and returning to his native Calabria. In 1599, he was imprisoned and tortured for his role in a conspiracy against Spanish rule in the town of Stilo. Campanella eventually confessed and was incarcerated in Naples for twenty-seven years, during which time he composed such works as The Monarchy in Spain (1600), Political Aphorisms (1601), and The City of the Sun (1602). This last title, originally written in Italian and later translated into Latin by the author, is considered an important example of utopian fiction in which Campanella describes the traditions and organization of an egalitarian society. Released from prison in 1626, he fled to France in 1634 when one of his followers was implicated in a new Calabrian conspiracy. His final years were spent in Paris, where he earned the support of King Louis XIII and was protected by Cardinal Richelieu.