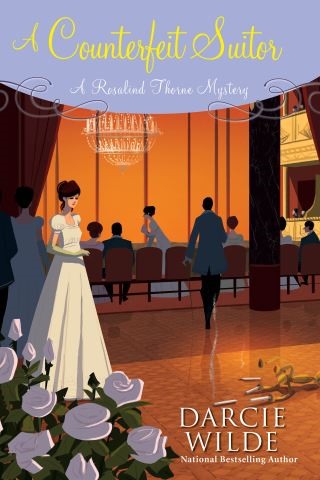 “Wilde's heroine is not only a useful woman but a highly entertaining one.”
—Kirkus Reviews on And Dangerous to Know

Among the ton of Regency London, one breath of scandal can be disastrous. Enter Rosalind Thorne, a young woman adept at helping ladies of quality navigate the most delicate problems—in this charming mystery series inspired by the novels of Jane Austen . . .

It is every mama’s dearest wish that her daughter marries well. But how to ensure that a seemingly earnest suitor is not merely a fortune hunter? Rosalind is involved in just such a case, discreetly investigating a client’s prospective son-in-law, when she is drawn into another predicament shockingly close to home.

Rosalind’s estranged father, Sir Reginald Thorne—a drunkard and forger—has fallen into the hands of the vicious scoundrel Russell Fullerton. Angered by her interference in his blackmail schemes, Fullerton intends to unleash Sir Reginald on society and ruin Rosalind. Before Rosalind’s enemy can act, Sir Reginald is found murdered—and Fullerton is arrested for the crime. He protests his innocence, and Rosalind reluctantly agrees to uncover the truth, suspecting that this mystery may be linked to her other, ongoing cases.

Aided by her sister, Charlotte, and sundry friends and associates—including handsome Bow Street Runner Adam Harkness—Rosalind sets to work. But with political espionage and Napoleon loyalists in the mix, there may be more sinister motives, and far higher stakes, than she ever imagined . . .

Darcie Wilde: Darcie Wilde is the author of the Rosalind Thorne Mysteries, a Regency-set historical mystery series inspired by the novels of Jane Austen, as well as the Regency Makeover Trilogy of eNovellas. Her book Lord of the Rakes was a 2014 Romantic Times nominee for Best First Historical Romance. Visit her online at darciewilderomance.com.