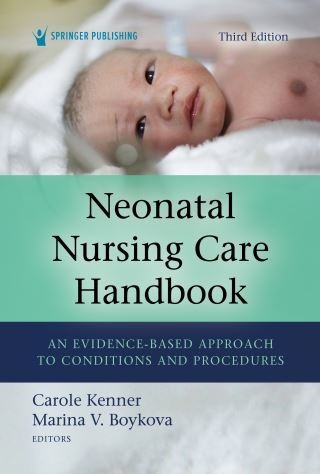 An Evidence-Based Approach to Conditions and Procedures

This benchmark handbook for neonatal nurse practitioners describes the most common conditions and procedures in an easy-to-access streamlined format. This thoroughly revised third edition continues to promote the foundational principles of evidence-based nursing practice worldwide, while taking the resources and requirements of different practice settings into account. It delivers updated information on trauma-informed care and offers new sections on parent perspectives about transition to home, neonatal opioid withdrawal syndrome (NOWS), and therapeutic hypothermia.

Designed with a logical organization, Neonatal Nursing Care Handbook, Third Edition features brief narratives and plentiful illustrations and charts. This quick reference is easily used by English-as-second-language nurses and can be conveniently stored in a pocket for on-the-go referral. Part I uses a systems approach to address management of disorders related to each body system. All chapters include a brief definition of the neonatal problem, followed by diagnostic tests and labs. Part II encompasses special care considerations such as nutrition, surgical care, and palliative care. Part III discusses widely seen procedures and diagnostic tests, complete with lab values. Appendices contain additional useful content on weights and temperatures, common abbreviations, and pertinent web resources.

New to the Third Edition:

Carole Kenner, Ph.D., RN, FAAN, FNAP, ANEF, is the Carol Kuser Loser Dean/Professor of the School of Nursing, Health, and Exercise Science at the College of New Jersey. Dr. Kenner received a BS in nursing from the University of Cincinnati and her MS and PhD in nursing from Indiana University. She specialized in neonatal/perinatal nursing for her master’s and obtained a minor in higher education for her doctorate. She has authored more than 100 journal articles and 25 textbooks.

Her career is dedicated to nursing education and to the health of neonates and their families, as well as educational and professional development of healthcare practices in neonatology. Her dedication includes providing a healthcare standard for educating neonatal nurses nationally and internationally. Her passion led her to begin the journal Newborn and Infant Nursing Reviews, for which she served as an editor and then associate editor. She worked with the National Coalition on Health Professions Education in Genetics (NCHPEG) and the American Nurses Association to develop genetic competencies. She helped develop the End-of-Life Nursing Education Consortium (ELNEC) Neonatal/Pediatric modules. She served as the co-chair of the Oklahoma Attorney General’s Task Force on End-of-Life/Palliative care. She also helped development program recommendations for perinatal/neonatal palliative care as part of a family-centered/developmental care project sponsored by the National Perinatal Association. She serves on the Consensus Committee of Neonatal Intensive Care Design Standards, which sets recommendations for Neonatal Intensive Care Unit designs and serves on the March of Dimes Nursing Advisory Committee. She is a fellow of the American Academy of Nursing (FAAN), a fellow in the National Academies of Practice, a fellow in the Academy of Nursing Education, past president of the National Association of Neonatal Nurses (NANN), and founding president of the Council of International Neonatal Nurses (COINN), the first international organization representing neonatal nursing in setting standards globally. She is the 2011 recipient of the Audrey Hepburn Award for Contributions to the Health and Welfare of Children internationally.