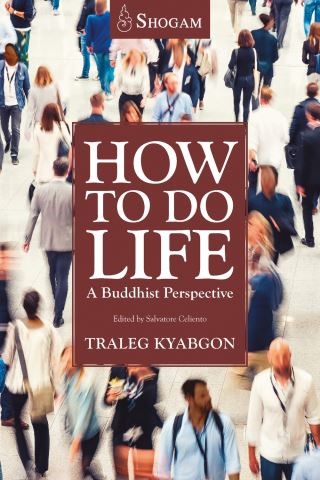 How To Do Life

During Traleg Kyabgon Rinpoche's life, he taught extensively, not only in regard to Tibetan Buddhist texts, but also practical, down-to-earth advice on how to do life better, advice on how we can review our relationship with ourselves, others, and the world in such a way that can help to enhance our experience of life generally, and more heroically assist us to face the many challenges life presents. How To Do Life is a collection of teachings given by the author that includes discussion on such topics as love and relationships, emotions, and depression. Rinpoche provides a fresh approach to reviewing our experience, and explains the Buddhist perspective on building awareness and reducing suffering. It provides insights that can help us Do Life better.

Traleg Kyabgon: Salvatore Celiento has studied and lectured on counseling in universities in Australia for many years. He is a graduate of Shedra studies - studying traditional texts from the Kagyu and Nyingma traditions of Tibetan Buddhism - through Traleg Kyabgon RInpoche IX's centre, E-Vam Institute. Salvatore has a Masters degree in counseling from Victoria University and Pastrol Counseling degree from Australian Catholic University. He is an accomplished martial artists in the Japanese tradition of Ninjutsu and his other studies include the Shakuhachi bamboo flute (with Grand Master Riley Lee). Traleg Kyabgon Rinpoche IX (1955-2012) was born in Nangchen in Kham, eastern Tibet. He was recognized by His Holiness XVI Gyalwang Karmapa as the ninth Traleg tulku and enthroned at the age of two as the supreme abbot of Thrangu Monastery. Rinpoche was taken to Rumtek Monastery in Sikkim at the age of four where he was educated with other young tulkus in exile by His Holiness Karmapa for the next five years.Rinpoche began his studies under the auspices of His Eminence Kyabje Thuksey Rinpoche at Sangngak Choling in Darjeeling. He also studied with a number of other eminent Tibetan teachers during that time and mastered the many Tibetan teachings with the Kagyu and Nyingma traditions in particular including the Havajra Tantra, Guhyasamaja Tantra, and the third Karmapa's Zabmo Nangdon (The Profound Inner Meaning) under Khenpo Noryang (abbot of Sangngak Choling). Rinpoche studied the Abhidharmakosha, Pramanavarttika, Bodhisattvacharyavatara, Abhidharmasamuccaya, Six Treaties of Nagarjuna, the Madhyantavibhaga, and the Mahayanuttaratantra with Khenpo Sogyal. He also studied with Khenpo Sodar and was trained in tantric ritual practices by Lama Ganga, who had been specifically sent by His Holiness Karmapa for that purpose.In 1967 Rinpoche moved to the Institute of Higher Tibetan Studies in Sarnath, and studied extensively for the next five years. He studied Buddhist history, Sanskrit, and Hindi, as well as Longchenpa's Finding Comfort and Ease (Ngalso Korsum), Seven Treasuries (Longchen Dzod Dun), Three Cycles of Liberation (Rangdrol Korsum), and Longchen Nyingthig with Khenchen Palden Sherab Rinpoche and Khenpo Tsondru.When Rinpoche had completed these studies at the age of sixteen, he was sent by His Holiness Karmapa to study under the auspices of the Venerable Khenpo Yesha Chodar at Sanskrit University in Varanasi for three years. Rinpoche was also tutored by khenpos and geshes from all four traditions of Tibetan Buddhism during this time.Rinpoche was subsequently put in charge of Zangdog Palri Monastery (the glorious copper colored mountain) in Eastern Bhutan and placed under the private tutelage of Dregung Khenpo Ngedon by His Holiness Karmapa to continue his studies of Sutra and Tantra. He ran this monastery for the next three years and began learning English during this time.From 1977 to 1980, Rinpoche returned to Rumtek in Sikkim to fill the honored position of His Holiness' translator, where he dealt with many English-speaking Western visitors.Rinpoche moved to Melbourne, Australia in 1980 and commenced studies in comparative religion and philosophy at LaTrobe University. Rinpoche established E-Vam Institute in Melbourne in 1982 and went on to establish further Centers in Australia, America and New Zealand. For the next 25 years Rinpoche gave weekly teachings, intensive weekend courses, and retreats on classic Kagyu and Nyingma texts. During this time Rinpoche also taught internationally travelling extensively through America, Europe, and South East Asia and was appointed the Spiritual Director of Kamalashila Institute in Germany for five years in the 1980's.Rinpoche established a retreat center, Maitripa Centre in Healesville, Australia in 1997 where he conducted two public retreats a year. Rinpoche founded E-Vam Buddhist Institute in the U.S in 2000, and Nyima Tashi Buddhist Centre in New Zealand 200