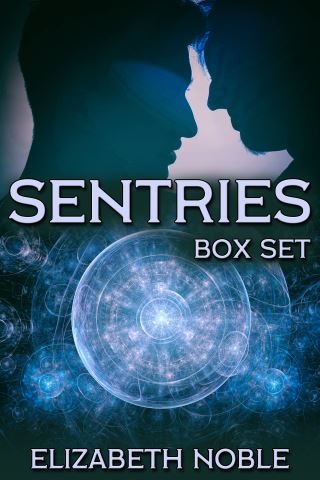 Three hundred years ago, natural disaster reformed the face of North America, and the people who lived in the shadow of the Rocky Mountains would never be the same.

Now, the master/slave bond in New Colorado has become a sacred rite of service, protection, and, sometimes, for the lucky, love. Follow Nick and his beloved Master, Todd Ruger, a sentry of the territories, as they struggle to survive together amid the collision of old superstition, new beliefs, territorial war, and the ever-present danger of the natural and supernatural frontier.

Marked Yours: Todd is a sentry, raised and trained to stop evil. Born a slave, Nick’s a psychic, meant to be another weapon in Todd’s arsenal. Todd doesn’t want a weapon and Nick doesn’t want to be one. They both want a partner, a mate. What they get is so much more. More than the sum of their partnership, they set out on a life together determined to make a difference. If they can survive.

Together Bound: Mysterious attacks are taking place at the Chancellor’s Estate. Against their will and their better judgement, Todd and Nick go undercover to track a vicious killer. Catching it, thought, could turn their lives upside down and the love they have for each other could be the real victim.

Chained Hearts: War rages in New Colorado Protectorate. Try as hard as they do, Todd and Nick Ruger can’t run far enough to avoid being drawn back into the conflict. Used as pawns by the power-hungry Vice Chancellor forces each man to the breaking point. Love and forgiveness become their most powerful weapon in the fight to preserve the family they’ve created.

Collared Souls: War is hell and conspiracy theories abound. Todd and Nick Ruger are thrown kicking and fighting into the thick of things. Attacks come from all sides threatening not only their lives but the bond they’ve forged. All fences can be mended, and again, this is a hard-learned fact for the Rugers. Their family is forever if they can survive. Love each other is the most important lesson of all.

Tethered Pair: The battle to preserve New Colorado Protectorate rages on forcing Todd and Nick Ruger to use every skill they possess to survive. Their most powerful weapon against the supernatural threats they face is the bond they have with each other. Will their bond survive a war with a demonic enemy?

Ringed Love: You are everything to me. My breath, my heartbeat. Without you my life would be empty. Todd and Nick Ruger live a life filled with adventure, surprises and danger. Throughout it all, good times and heartbreaking events their love holds fast and grows, always there, never ending. That was the way it was always meant to be.