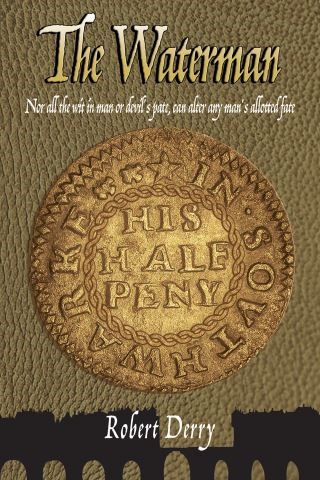 Nor all the wit in man or devil's pate, can alter any man's allotted fate

Terry Stubbs is a young man getting old before his time and is haunted by a face that invades his dreams. His life is on the rocks after failing to find his fortune on the trading floors of the ruthless city of London. Jake Harvey is a successful salesman on his way up the ladder, but his world will never be the same again, now that the nightmares have started.
The same dreams. The same nightmares. Different people.
A waterman from seventeenth century London lurks like a troll beneath the old London Bridge, reaching out across the ages to tug at his victims. Infiltrating their lives. Reeling them in.
A journey through time that will make you think twice, before you ever pay the ferryman again.

Robert Derry: Robert Derry is in his 50s, is a human resources consultant, living in Somerset, England. He was educated at Lancaster University before moving to London, where he worked in the city, within a stone’s throw of the River Thames and the site of his debut novel, The Waterman. He is an avid supporter of Aston Villa Football Club, who hail from his hometown of Birmingham, England, and of the NFL, following the Green Bay Packers from a distance. He is married to Tina with two grown-up children and two troublesome cats.