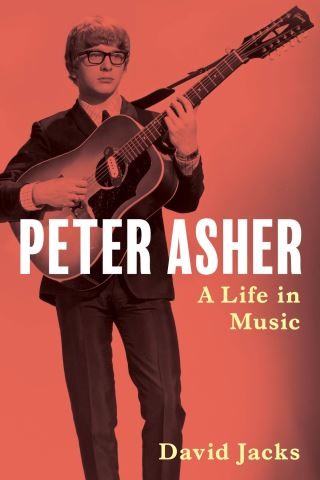 A Life in Music

Spanning more than fifty years of modern music history, Peter Asher: A Life in Music highlights every turn in Peter Asher's amazing career. Over a dozen years of research has gone into telling his story, with numerous interviews conducted with Asher, along with first-hand observations of him at work in various recording studios around Los Angeles. The author also had access to Asher's archives, which offered rare photographs and other career memorabilia to help illustrate this biography.

Asher was also one of the first producers to list the musicians that played on his sessions, realizing how important they were to the success of each project. These mini-portraits not only contribute to the telling of his story, they ultimately give the reader a history lesson on the last fifty years of popular music. Of course, Asher's life and work did not occur in a vacuum, and David Jacks places his progress in context with what was occurring in the culture that surrounded him, from the pervasive doldrums that America was experiencing right before the Beatles (and Peter and Gordon) exploded upon its shores to the civil rights tensions that surrounded the interracial tour Dick Clark sent through the Southern US in 1965, to the end of the 1960s and the public's need for a soothing confessional tone in their music after a decade of turmoil, which artists like James Taylor provided.

Asher has also had a unique insider's view into the changing world of the music business—from the mid-1960s explosion of British artists to the 1970s corporate takeovers of independent labels, from the MTV era of the mid-1980s to the modern era of 360 degree deals and digital streaming. He is practically alone in his success as a hit-making artist, a hit-making producer, and a manager for hit-making talent. His ability to produce projects with such a broad range—rock, pop, folk, country, rhythm and blues, jazz, dance, Latin, classical, comedy, and Broadway and movie soundtracks—is almost unheard of. And in a business rife with shady characters, his intelligence, honesty, and business sense has earned the respect of all he's worked with. Still producing exciting work in the entertainment industry, Peter Asher has quite a story to tell.

Born in Arkansas in 1955, David was influenced by his mother, a history teacher, and his father, an amateur musician. Both fueled David’s passion for music, including researching the histories of the artists he admired. After earning a degree in cinema, he moved to Hollywood, where he worked as video editor, audio producer, and music supervisor for various clients, including Walt Disney Home Video and Universal Studios Tour. Eventually, David was hired by Comcast Entertainment as a music supervisor, choosing music for hundreds of television shows and specials.

David bought his first Peter and Gordon record when he was eight. Writing Peter Asher: A Life in Music, his first book, brings him full circle—telling the stories behind the records that have thrilled him since he was young.