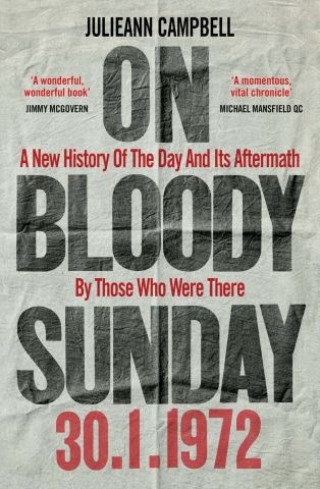 'There have been many books written about the events of Bloody Sunday, however, none has wrenched the reader as violently back to those CS gas-choked streets, dumping them right in the heart of the screaming, running, shooting and crying, as Julieann Campbell's On Bloody Sunday. A powerful chronicle of one of the darkest episodes of modern times.' - Sunday Times

'Powerful and moving ... The strength of this important new book lies in the artistry the author brings to the tasks of portraying both the community upon which the massacre was perpetrated, and the individuals within it.' - Irish Times

'Meticulous.... On Bloody Sunday possesses a veracity and cumulative power that sets it apart from previous accounts' - Observer

'A momentous chronicle, timely and vital, which highlights that the burden of change rests, as always, upon the shoulders of those who suffered and yet, have nurtured the desire that lessons be learned.' - Michael Mansfield QC, who represented a number of families during the Bloody Sunday Inquiry.

'It is a vital record of the time, the city, and its people, and more impressive still it does so almost entirely in their own words, their heartbreak, their anger, their resilience, their humour. Julieann Campbell has given their voices, so long silenced, the dignity they deserve. It is a staggering achievement.' - Séamas O'Reilly

'It's a wonderful book. The technique used - multiple voices speaking directly to us - is very simple but it has a profound effect. It puts us into the middle of the chaos of Bloody Sunday and keeps us there throughout the grief and anger that follow. A wonderful, wonderful book.' - Jimmy McGovern, BAFTA winning screenwriter, creator of 'Sunday' (2002)

The events occurred in broad daylight and in the full glare of the press. Within hours, the British military informed the world that they had won an 'IRA gun battle'. This became the official narrative for decades until a family-led campaign instigated one of the most complex inquiries in history.

In 2010, the victims of Bloody Sunday were fully exonerated when Lord Saville found that the majority of the victims were either shot in the back as they ran away or were helping someone in need. The report made headlines all over the world.

While many buried the trauma of that day, historian and campaigner Juliann Campbell - whose teenage uncle was the first to be killed that day - felt the need to keep recording these interviews, and collecting rare and unpublished accounts, aware of just how precious they were. Fifty years on, in this book, survivors, relatives, eyewitnesses and politicians, shine a light on the events of Bloody Sunday, together, for the first time.

As they tell their stories, the tension, confusion and anger build with an awful power. ON BLOODY SUNDAY unfolds before us an extraordinary human drama, as we experience one of the darkest moments in modern history - and witness the true human cost of conflict.

An award-winning author, Julieann Campbell's seventeen-year-old uncle, Jackie Duddy, was the first person to be killed on 30 January 1972. For more than a decade, Julieann has worked to document and archive the collective experiences of that day. As a former Chair of the Bloody Sunday Trust, she took on the role of family press officer ahead of the Bloody Sunday Inquiry in 2010.

She is a PhD Researcher at Ulster University's School of Law exploring impact of post-conflict storytelling and is a director of the Pat Finucane Centre for Human Rights.