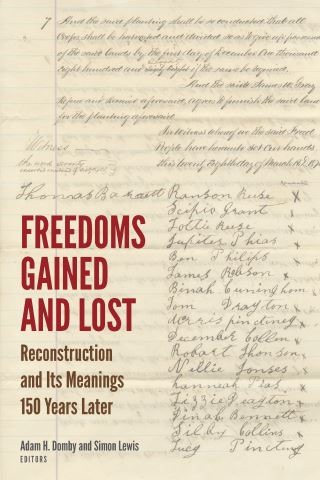 Reconstruction and Its Meanings 150 Years Later

Reconstruction is one of the most complex, overlooked, and misunderstood periods of American history. The thirteen essays in this volume address the multiple struggles to make good on President Abraham Lincoln’s promise of a “new birth of freedom” in the years following the Civil War, as well as the counter-efforts including historiographical ones—to undermine those struggles. The forms these struggles took varied enormously, extended geographically beyond the former Confederacy, influenced political and racial thought internationally, and remain open to contestation even today. The fight to establish and maintain meaningful freedoms for America’s Black population led to the apparently concrete and permanent legal form of the three key Reconstruction Amendments to the U.S. Constitution, as well as the revised state constitutions, but almost all of the latter were overturned by the end of the century, and even the former are not necessarily out of jeopardy. And it was not just the formerly enslaved who were gaining and losing freedoms. Struggles over freedom, citizenship, and rights can be seen in a variety of venues. At times, gaining one freedom might endanger another. How we remember Reconstruction and what we do with that memory continues to influence politics, especially the politics of race, in the contemporary United States. Offering analysis of educational and professional expansion, legal history, armed resistance, the fate of Black soldiers, international diplomacy post-1865 and much more, the essays collected here draw attention to some of the vital achievements of the Reconstruction period while reminding us that freedoms can be won, but they can also be lost.