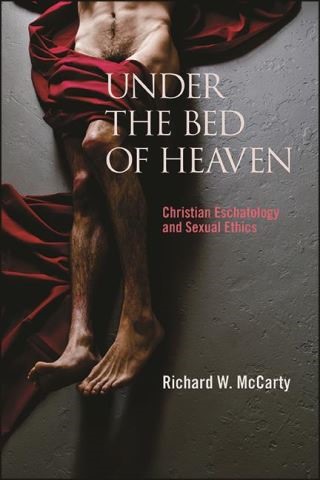 Under the Bed of Heaven

Under the Bed of Heaven is a work of Christian ethics that examines how eschatology might reshape concepts of sexual morality. With the rise of institutional Christianity in the Roman Empire, Christian attitudes about sexual desire and activity were soon controlled by doctrines of virginity and celibacy, or, monogamous marriage for the sake of procreation. These moral theologies aligned with a certain track of Christian eschatology, which imagined the future resurrection of the body, but without any corresponding sexual desires. As a result, traditional Christianity developed a preference for celibacy on earth to match the loss of sexual desire and activity in heaven, making marriage and monogamy temporal goods only.

In recent years, a few scholars of religion have challenged whether this vision of a sexless heaven is valid. However, they have not fully developed a vision of sex in heaven that might function to critique and reform Christian sexual ethics on earth. Richard W. McCarty explores scripture, church teachings, and different models of eschatology to offer a bold new conception of Christian sexual ethics that is inclusive of LGBTQ and heterosexual people, both in and outside of monogamous configurations.

Richard W. McCarty: Richard W. McCarty is Professor of Religious Studies at Mercyhurst University. He is the author of Sexual Virtue: An Approach to Contemporary Christian Ethics, also published by SUNY Press.