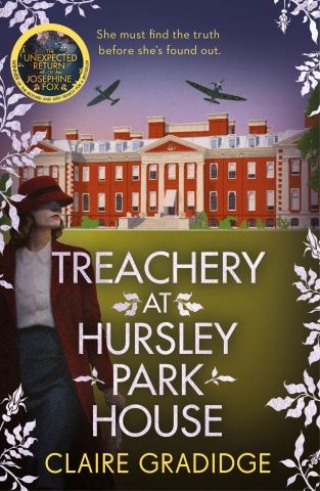 From the winner of the Richard and Judy Search for a Bestseller competition comes another tantalising Golden Age wartime mystery, perfect for fans of Sunday night drama.

DECEMBER 1942. As the war rages on, the accidental death of a young man is almost unremarkable. Except this young man was patrolling the grounds of Hursley Park House, where teams are designing crucial modifications to the Spitfire - and he was found clutching part of a blueprint.

JANUARY 1943. Josephine Fox is given a code name and a mission as she is seconded to Hursley: uncover the network responsible for information leaks to the enemy. And when the dead man's father visits Bram Nash convinced that his son was innocent of espionage and the victim of murder, her friend is also drawn into the investigation.

But as Jo and Bram circle closer to the truth, danger is closing in around them...

*INCLUDES AN EXCLUSIVE LOOK AT THE NEXT JOSEPHINE FOX MYSTERY, A CONFLICT OF INTERESTS*

Claire Gradidge: Claire Gradidge was born and brought up in Romsey. After a career as, among other things, a nurse and a school librarian, she went to the University of Winchester, where she graduated in 2009 with a first class honours BA in Creative Writing. In January 2018, she was awarded a PhD in creative writing and The Unexpected Return of Josephine Fox was written as the creative element of her PhD study. An early version of the opening 3000 words was highly commended in the Good Housekeeping Magazine competition in 2012.

She has taught at the University of Winchester as an Associate Lecturer for six years and has also had some short fictions and poems published in South, Orbis and Vortex. She has been married for 40 years and has two adult sons.