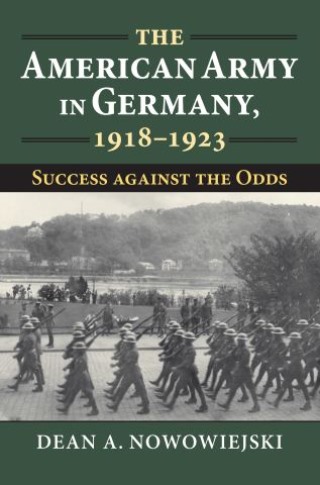 Success against the Odds

The American Army in Germany, 1918–1923: Success against the Odds by Dean A. Nowowiejski fills a gap in American military and political history through thorough research and a compelling narrative of the Rhineland occupation. After the armistice ended the fighting on the Western Front in World War I, the Third US Army marched into the American occupation zone around the city of Koblenz, Germany, in December 1918. American forces remained there as part of an “inter-Allied” coalition until early 1923. Nowowiejski reintroduces us to a successful military-diplomat, Major General Henry T. Allen, who faced two major challenges: build an efficient army and handle the complexity of working with the Allied powers of France, Britain, and Belgium in the Inter-Allied Rhineland High Commission (IARHC).

Allen’s ability to balance the interests of the French with those of the occupied Germans made him an indispensable participant in the High Commission. As the French sought revenge and added security against Germany, Allen moderated their actions with diplomatic skill. When the French sent forces into Germany in 1920 and 1921, Allen ensured that the US zone around Koblenz remained free of French interference. These achievements were without the support of the administration, and Congress had no desire to take part in European affairs.

Allen also had to create a competent American army in the Rhineland so that the Allied powers and the Germans would respect American views and interests. He successfully took a large number of new recruits, who replaced World War I combat veterans, and molded them into a professional fighting force. As a result, the American Forces in Germany became an exemplar for the entire US Army and a symbol to the Allies and Germans of American power and resolve. This force competently accomplished the difficult task of postwar occupation according to the highest international standards. The US administration made the decision in 1922 to radically cut back the size of Allen’s army, and in 1923 to remove all US troops from Germany. The author analyzes this withdrawal as a “missed opportunity” for US leverage on diplomatic developments in Europe.