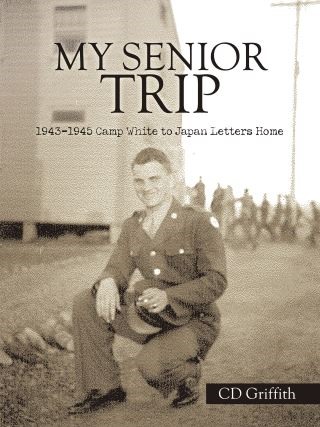 During his childhood, C. D. Griffith lived on his family’s Indiana farm in the Eel River bottoms where he worked the land, hunted, and fished, never venturing further than twenty-five miles from home. But all of that changed during his senior year of high school when he was drafted into the US Army. In March 1943, with a brief stop at Fort Benjamin Harrison in Indianapolis, eighteen-year-old Griffith headed on a train to Camp White in Medford, Oregon, with a final stop in Japan. In a collection of original, unedited letters penned to his family, Griffith details his experiences as a soldier serving his country in a faraway land. His letters contain vivid descriptions of what he learned in camp and witnessed in the Pacific while bravely battling the enemy as a member of the Greatest Generation. My Senior Trip shares the original letters of a Second World War soldier that provide a fascinating glimpse into his experiences while serving his country overseas.

CD Griffith: C. D. Griffith was drafted during his senior year of high school in Coalmont, Indiana. He joined the army on March 2, 1943, one month prior to his high school graduation.