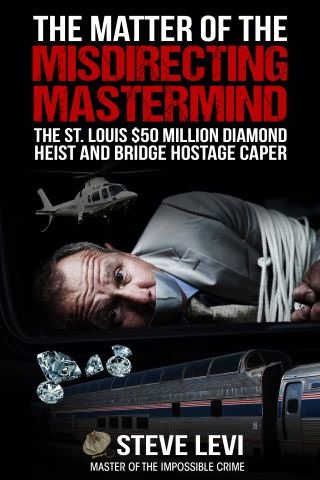 The Matter of the Misdirecting Mastermind

Impossible Crime Detective Heinz Noonan, the “Bearded Holmes,” is ordered to East St. Louis, where a criminal mastermind has made a train with 70 passengers and crew disappear. As the search is on for the hostage, the mastermind loads a railway boxcar with a massive explosive device and abandons it on the Eads Bridge over the Mississippi River between St. Louis, Missouri and East St. Lewis, Illinois. Now the mastermind wants $50 million, or the bridge and portions of both cities of St. Lewis will be destroyed. Heinz Noonan has 48 hours to find the hostages, stop the ransom payment, and disable the bomb before time runs out. Tick, tick, tick. Can he do it? Find out in The Matter of the Misdirecting Mastermind.

Steve Levi: Steve Levi, an Alaskan historian and writer, has lived in Alaska for more than four decades and has more than 100 books in print and as eBooks. His nonfiction books on Alaska history include Boom to Bust in the Alaska Gold Fields, a historical forensic investigation into the sinking of Alaska's ghost ship, the Clara Nevada, as well as a history of Alaska's bush pilot heritage, Cowboys of the Sky, a “Battle of the Books” winner in 2008. His flying books include a technical how-to for flying in Alaska, Bush Flying, and Archie Ferguson a biography of legendary bush pilot. His fiction specialty is the impossible crime in which the detective has to discover HOW the crime was committed before he can capture the perpetrators. The Matter of the Misdirecting Mastermind is the fifth in the impossible crime series.