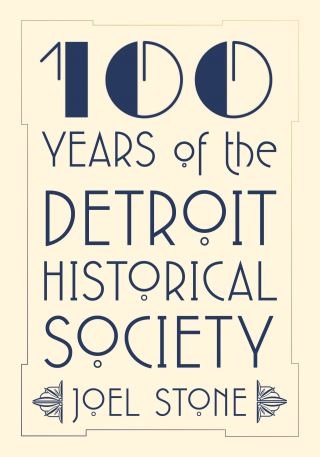 100 Years of the Detroit Historical Society

Since its founding in 1921, the Detroit Historical Society (DHS) has been dedicated to safeguarding the history of our region so that current and future generations of metro Detroiters can better understand the people, places, and events that helped shape our lives. 100 Years of the Detroit Historical Society, written by senior curator Joel Stone, captures in words and photographs the little-known story of the people who have been telling Detroit’s stories and preserving its material culture for the last century. 100 Years of the Detroit Historical Society leads in a chronological manner through four distinct phases—each with its own successes and failures—with a nod to the future direction of the DHS. Stone begins by laying a foundation of the city’s history and describing the era that prompted the organization’s founding—first intended as support for the Burton Historical Collection, then as stewards of a growing artifact collection in a "cabinet of curiosities." DHS became the primary support organization for a new municipally owned and managed historical department, resulting in multiple facilities and storytelling capabilities. Later, changing social and fiscal priorities prompted the DHS and its partners to adopt new strategies for interpretation, funding, outreach, and inclusion. Eventually, the DHS would assume stewardship of the Detroit Historical Museum and Dossin Great Lakes Museum, bringing new momentum to regional public history. It is important to note the truism that historical museums and archives can be poor caretakers of their own history. The DHS’s history was intertwined with a municipal department for so long that they actually have two histories that are only roughly preserved. Research for this volume has woven many disparate details into a cogent tapestry that is easily digested by museum professionals and visitors alike. It is a fascinating tale that reflects the pride Detroiters have in their city and shows trends in historical preservation and organizational structures across North America.