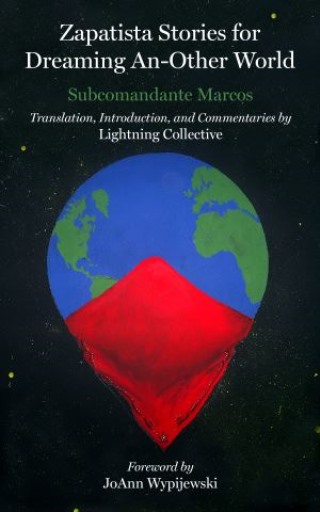 Zapatista Stories for Dreaming An Other World

In this gorgeous collection of allegorical stories, Subcomandante Marcos, idiosyncratic spokesperson of the Zapatistas, has provided “an accidental archive” of a revolutionary group’s struggle against neo-liberalism. For 30 years, the Zapatistas have influenced and inspired movements worldwide, showing that another world is possible. They have infused Left politics with a distinct imaginary—and an imaginative, literary or poetic dimension—organizing horizontally, outside and against the state, and with a profound respect for difference as a source of political insight, not division. Marcos’s inspiring and sometimes Kafkaesque stories bear witness to how a defense of indigenous traditions can become a lever for the construction of a new anti-capitalist and anti-patriarchal world. With commentaries that illuminate their historical, political, and literary contexts and an introduction by the translators, this timeless elegiac volume is perfect for lovers of literature and lovers of revolution.

Subcomandante Insurgente Marcos of the Zapatista Army of National Liberation (EZLN) was the Zapatista spokesperson until May of 2014 when the Zapatistas decided that his role had come to an end. While “Marcos” disappeared, he was reborn under a different name: Subcomandante Galeano, again adopting thename of a fallen comrade.