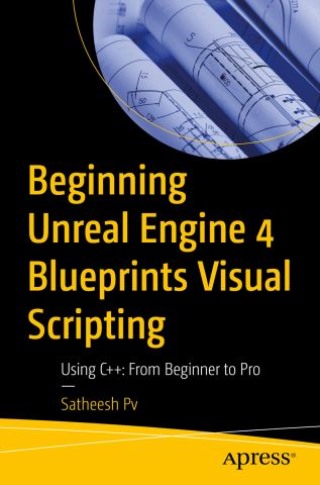 Using C++: From Beginner to Pro

Discover how Unreal Engine 4 allows you to create exciting games using C++ and Blueprints. This book starts with installing, launching, and examining the details of Unreal Engine.

Next, you will learn about Blueprints and C++ and how to leverage them. The following chapters talk in detail about gameplay, basic physics, and ray-casting for game development in Unreal Engine. Furthermore, you’ll create material, meshes, and textures.

The last chapter brings all the concepts together by building a demo game. By the end of the book, you’ll be equipped with the know-how and techniques needed to develop and deploy your very own game in Unreal Engine.

Beginners interested in learning Blueprints visual scripting and C++ for programming games in Unreal Engine 4 would find this book useful.

Satheesh Pv: Satheesh Pv is a game programmer living in Mumbai, India. He started his career as a game developer in 2012 by making a first-person multiplayer game with his brother and close friend using Unreal Development Kit and created Unreal X-Editor, which was an IDE developed for UnrealScript, the native scripting language of Unreal Engine 3. He was selected by Epic Games as one of the closed beta testers for Unreal Engine 4 before its public release. He is also a moderator at Unreal Engine forums as well as a spotlight member and Engine contributor.